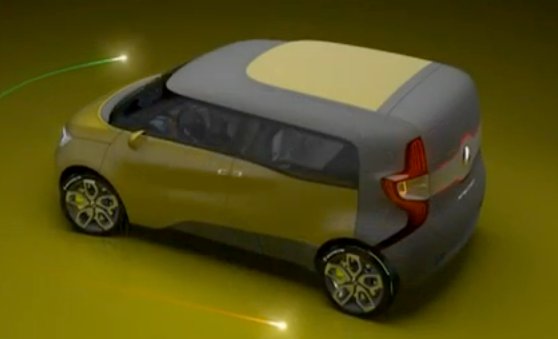 Back in 2009 we saw Renault bringing no less than four electric concepts to Frankfurt, namely the Kangoo ZE, Fluence ZE, Zoe ZE and the tiny Twizy ZE, which were used to offer a glimpse into how the company's zero emission product range was going to look. And they pretty much completed that task.

But as you may recall, the biggest absentee from that four-strong lineup was an electric supercar, which finally emerged a year later, in Paris.

So just when everybody thought there’s nothing left for Renault to do in the EV concept matter, the French manufacturer slaps us in the face by releasing an official video of its latest creation, which is likely to see daylight at the Frankfurt Auto Show this September: the Frendzy.

Unfortunately, details - regardless of their sort - are less than sketchy at this point. We can only use the video below to see how very far this concept is from a production model. Using the design cues outlined by other Renault concepts such as the DeZir, R-Space or Capture, the Frendzy (sounds pretty playful, doesn’t it?) is even more quirky on the inside.

Taken separately, exterior highlights include separate body colours for the front and rear end, a single sliding door on one side, and what appears to be an LCD screen instead of a window. The rear end opens at both the top and bottom, revealing a minimalistic interior adorned with LED lights. Futuristic dashboard and seat layout and functionality are among the key interior features.

Strikingly similar to the Kangoo ZE concept at first glance, the Frendzy reportedly comes as a car with multiple applications, which can be used both at work as well as while commuting with your family.