1 Renault Grows Outside Europe According to First-Half Sales

Renault Eleve Concept, the Rebirth of the Renault 4L 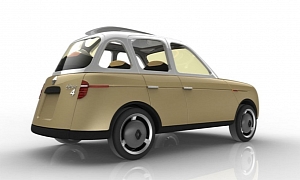 The retro concept Eleve is an innovatively redesigned vehicle by Allen Zadeh, an industrial designer. The main focus of this concept is flexibility. It gives you the power to customize this car in order to fit you personality.You can then wonder on the roads in your unique car, while other factory-made clones shiver with jealousy.

The Eleve (meaning student in french)concept is a modern day avatar of its predecessor, the Renault 4L. The 4L(pronounced Quatrelle) was runaway success when launched in 1961 just when the French economy was blooming. It became the darling of middle class owners, thanks to features like space, balanced suspension, comfortable seating, effective heating and ventilation which came at a decent price.

One look at the Eleve, and it holds your attention for a variety of reasons. For starters, the exterior panels can be exchanged or modified to suit individual tastes. In order to make it eco friendly the car has composite materials on its exterior and recycled textiles for its interior bits.

The Eleve’s designer, Allen Zadeh has used his extensive knowledge and experience to reinvent a 1960s iconic car, as related by automotto.com.The concept is contemporary while and respects the original design as much as possible.Also the younger generation which the Eleve targets will find this versatile and interactive product appealing. When we look at the Eleve concept, we tend to think about old wine in a new bottle, this time a eco friendly and versatile bottle that one opened spreads an old perfume that still awakes our senses.