2 LEGO Chevy Corvette C8.R and Bronco R Will Keep You Occupied When Off the Track

The GMC Hummer EV is arguably one of the most important new vehicles for General Motors. Wrapped up in a high-riding package, it marks a major step into the inevitable electric future, while checking nearly every box in the practicality department.
11 photos

An off-road beast with jaw-dropping straight-line performance in the top flavor that’s filled with the latest and greatest automotive tech, the GMC Hummer EV has gained immortality through LEGO. This scale model was created using approximately 2,200 small bricks, according to its maker, and needs your support to hit the shelves.

More on the latter in a moment, but first let’s check it out up close, starting with the exterior that manages to echo the real deal. It sports similar shaped lighting units up front, makes do without the roof panels, which are included, and has a congruent back end.

The cockpit mirrors the looks of the electric off-roader, with small black bricks used for the infotainment system and digital instrument cluster. The front seats are separated by a big armrest, and even the gear selector was replicated.

The LEGO Hummer EV has opening doors, a frunk and MultiPro Tailgate. Not only that, but it also gets four-wheel drive and adjustable suspension that can lift or lower the body at the push of a button, as demonstrated on film down below.

The cool project has been updated several times over the past few months, getting extra features each time, and will probably be revised again, so make sure to keep an eye on it.

To do so, you will have to click on this link that takes you to the official IdeasLego website. And since you’re there, a vote would be appreciated to help it qualify for production. At the time of writing, it needed around 60 more supporters to hit the 1,000 mark.

So, is this the cutest thing you have seen today, or what? 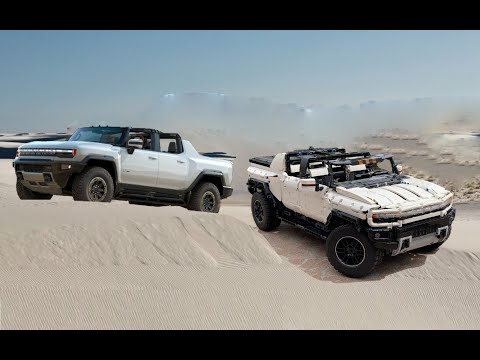