Today, when we talk about the first modern supercar, the model that springs to mind is the Ferrari F40. However, most of us seem to forget that a year earlier Porsche introduced the epic 959, a vehicle that could not only go head-to-head with the fabled prancing horse in terms of performance but was also way ahead of it when it came to technical innovations.

Remembering the Porsche 959, One of the Most Influential Supercars Ever Built

The story starts exactly four decades ago, in 1981, when the Zuffenhausen-based carmaker appointed Peter Schutz as the new managing director. At the time Porsche was a mess. The company came off the first money-losing year in its history and the plan was to discontinue the legendary 911, the only model that sold relatively well. Replacing it with the front-engine 928 that few people were buying seemed like an insane idea, so Schutz decided to ditch those plans and continue to develop the 911.

The man tasked with breathing new life into Porsche’s flagship was chief engineer Helmuth Bott, who had many great ideas that eventually translated into the 1984 Carrera 3.2, but he also wanted to step well outside the box and push the limits of the 911 by creating a new, high-performance model around it.

He convinced Schutz that developing such a car and entering it in FIA’s famed Group B rally championship would work wonders for the company’s image and assured the new director that he had an ace up his sleeve. Inspired by Audi’s radical Quattro, Bott assembled a team and started working on a revolutionary four-wheel-drive system that was mounted on a slightly modified 911 chassis.

Named PSK (Porsche-Steuer Kupplung), the system was a marvel of engineering and even today it is considered one of the most sophisticated ever created. Unlike the 4WD systems of the era, the PSK was capable of varying the torque split ratio under normal running conditions (what we now call torque vectoring), while other designs could only achieve that when wheel slip occurred. The default setting delivered 40% of the torque to the front and 60% rear, but under acceleration, up to 80% was redirected to the rear wheels. Moreover, during slippery conditions torque was equally split between the two axles to provide outstanding grip.

While the PSK was the highlight of the car which was eventually given the 959 moniker, the list of innovations didn’t stop there. The suspension system was another outstanding feat of engineering. Developed alongside the experts from Bilstein, it featured dual dampers on each corner, four of which were electronically controlled, allowing ride height and damping force adjustments while on the move.

The flat-six engine was also special. Based on a racing unit that powered the 956 and 962 Group C prototypes and stroked to 2.85 liters to meet FIA regulations, it featured an aluminum alloy head and block, titanium con-rods, forged pistons, and a dry-sump lubrication system. It was fed fuel by a state-of-the-art Bosch Motronic 2.1 injection system and employed a couple of small KKK turbochargers that operated sequentially to deliver boost from lower rpms. It was linked to a manual transmission that offered five forward speeds plus a "gelände" (terrain) off-road gear.

The first prototypes were finished in 1983 but in order to take part in Group B rallies, 200 production versions had to be built and Porsche was far from ready to meet that requirement. In the years that followed, the team managed to refine the engine and complete the bodywork. Although it looked much like a beefed-up 911, the additional Kevlar-composite panels were created using extensive wind tunnel testing a contributed to the car’s incredible 0.31 drag coefficient, a figure that was superior to the 0.34 of the Ferrari F40 and was later equaled by the McLaren F1 and Lamborghini Diablo.

The road-legal edition was unveiled at the 1985 Frankfurt Motor Show as a 1986 model, but due to numerous issues, production had to be delayed for more than a year.

Unfortunately, by the time the car was finally ready for production and homologation FIA decided to cancel Group B, so it never got to compete in the WRC. Despite that, three race versions took part in the Paris-Dakar Rally in 1986, finishing first, second, and sixth. It was an incredible feat that proved this was an incredible machine.

Porsche decided to go ahead with the limited production run and ended up building a little over 300 of these marvelous machines. Available in either Komfort or Sport trims, they were powered by the same flat-six as the racing cars. It was capable of spitting out 450 hp, which translated to a 0 to 60 mph (97 kph) acceleration time of just 3.6 seconds. The Sport could reach a top speed of 198 mph (319 kph), making it the world's fastest street-legal production car available at the time.

To make things more interesting the crazy 959S was released in 1988. With the help of larger turbochargers, power was increased to 508 hp, leading to an incredible top speed of 211 mph (339 kph).

Production ended in 1993, by which time the 959 became one of the most iconic sports cars ever created. It wasn’t as sexy as the Ferrari F40, but without a doubt, it was more technologically advanced and influential. It paved the way for the 911 Turbo models as well as many all-wheel-drive supercars such as the Bugatti EB110 or Veyron, Audi R8, Lamborghini Murciélago, Huracan, and Aventador.

You can take a virtual tour of one in the video below posted on YouTube by DtRockstar1. 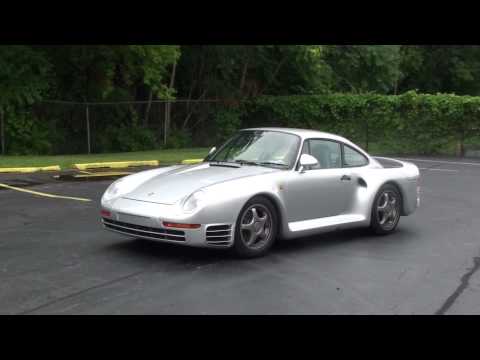