2 The Story of Busse, a Six-Wheel Amphibious ATV With a Volkswagen Heart

4 Saab to Peel the Veil Off Its Next-Gen Combat Boat 90, Here's Your Chance to Get on Board

5 Man Takes His Land Rover for Swimming Lessons, Turns It Into a Scuba Rover
Car video reviews:
Up Next

Officially codnamed DUKW, but known throughout the world as Duck, this six-wheel amphibious vehicle was a vital part of the Allied effort during the Second World War.

Today, Ducks are a somewhat popular tourist attraction, especially in the U.S. but, unfortunately, several high-profile accidents have made them extremely controversial.

However, during the Second World War, the innovative Ducks played a key role in the Allied forces’ success, particularly in Europe where they were used to transport artillery, supplies, and soldiers in remote coastal areas that other military vehicles could not reach.

Its story starts in the early 1940s, shortly after the U.S. officially entered WW2. At the time, the military was having problems resupplying units that had performed amphibious landings, so the National Defense Research Committee and the Office of Scientific Research and Development commissioned several companies to create an advanced amphibious vehicle.

The first DUKW prototypes were designed by Rod Stephens Jr. of Sparkman & Stephens, Inc., along with Dennis Puleston, a British deep-water sailor who lived in the U.S., and Frank W. Speir, a Reserve Officer from the famous Massachusetts Institute of Technology (MIT).

Initially, the proposal was rejected by the armed forces and even ridiculed for its wacky appearance, but as faith would have it, the Duck became a hero even before officially joining the war. As the team was finishing up some tests on a beach in Provincetown, Massachusetts, a United States Coast Guard patrol vessel with seven people on board ran aground on a sandbar. That day, the weather conditions were dire as winds blew with speeds of up to 60 knots (69 mph or110 kph). To make matters worse, it was raining heavily and there were huge waves, so conventional vehicles could not reach the stranded Coast Guardsmen. Fortunately, the DUKW team answered the call, and their experimental vehicle reached the vessel effortlessly.

From that point on, the military’s perception of the Duck changed. It later proved its seaworthiness again by crossing the English Channel, and it got approval for mass production.

The final design was perfected by a few General Motors engineers at Yellow Truck & Coach (GMC Truck and Coach Division after 1943) at their Pontiac West Assembly Plant in Pontiac. Most of the Ducks were built there while others were assembled at GM’s St. Louis Truck Assembly Plant.

The amphibious vehicle was developed around the GMC AFKWX, a cab-over-engine variant of the GMC CCKW military truck. Its body was completely redesigned, earning a watertight, steel-plated hull and a propeller. To keep the weight down, designers opted not to fit any armor on the body, and instead, they fitted a high-capacity bilge pump system that could keep it afloat if the hull was breached by holes up to 2 inches (51 mm) in diameter.

Power came from a 269.5 -ci (4.0-liter) GMC Model 270 straight-six mated to a five-speed overdrive transmission that drove a two-speed transfer case connected to the axles and an additional transfer case for the propeller. A power take-off on the gearbox also drove an air compressor and a winch.

In terms of firepower, one in four DUKWs came with a .50-caliber Browning heavy machine gun on a ring mount, while the other featured no built-in firearms.

An interesting innovation made the Duck the first vehicle that allowed drivers to vary the tire pressure from inside the cab. With this tech, the tires could be fully inflated for use on hard surfaces such as concrete roads, or they could be slightly defeated to tackle softer surfaces like mud or sand. This feature boosted versatility and later became standard on all military vehicles.

The Duck saw its first action in the Pacific theater, but the vehicle became famous in Europe where invasion forces used it during Operation Husky (the invasion of Sicily), as well as the notorious Normandy landings where it played a key role.

After WWII ended, they saw use in several regional conflicts like the Korean War, First Indochina War, and the Malayan Emergency.

Although never intended for civilian use, some surviving examples were converted into amphibious tour buses. Unfortunately, several incidents (some resulting in loss of life) have given the Ducks a bad reputation. The companies who still use them today have been forced to upgrade their vehicles with modern safety tech like blind spot cameras or state-of-the-art waterproofing sealants.

Despite the bad reputation gained by poorly converted civilian versions, the original DUKW, which celebrates its 80th anniversary this year, remains a WWII hero and undoubtedly the most iconic amphibious vehicle ever built.

If you want to learn more about the mighty Duck, we recommend the documentary below posted on YouTube by the Documentary HD Channel. 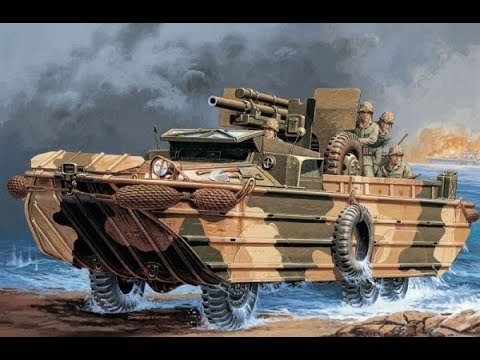