2 Can You Change Engine Oil Without Turning Off a Motor? We Now Have an Answer to This

5 Co-Welded Ladas Are so Next Level Widebody That Even Russians Track Test Them
Car video reviews:
Up Next

The phrase “automotive art” is used sparsely and with great care and consideration, but it wouldn’t be amiss in this case. Meet the coolest G-Wagon tribute that ever was, the Ice G-Wagon.

The name pretty much says it all: this is a tribute car with a body made entirely out of ice. Even though it’s not the best car and not even the most impressive ice sculpture out there or the first ice car, the Ice G-Wagon still deserves a page in the automotive history books and at least 15 minutes of your spare time. The mere fact that it existed (in the Past Tense, sadly) grants it that very special position.

The Ice G-Wagon is the creation of enthusiastic mechanic Vladislac Barashenko and his team, both of whom you probably know already as the gearheads behind the popular YouTube channel Garage 54. When they’re not creating automotive Frankensteins out of Ladas, building new engines, or what-have-you, they also do jaw-dropping stuff like the ice SUV.

This is actually an older creation, which they revealed to the public in the summer of 2018 in a series of episodes that immediately went viral. This month (September 2022), they relived that adventure with a montage of those episodes and a tribute to the G-Wagon. It is sadly no longer among us (the ice bodywork, at least), but it will forever live in our collective memory.

The most peculiar thing about the Ice G-Wagon is that it wasn’t even a real G-Class. Barashenko and his team are based in Novosibirsk, Russia, so access to expensive Western cars is limited, to say the least. Garage 54 has a reputation for fabricating strange and awesome vehicles out of beat-up Russian cars and trucks, and this is no exception: for the Ice G-Wagon, they used the rolling chassis of a UAZ 469 light utility vehicle.

They did it “just for kicks,” Barashenko said at the time. They removed the body of the UAZ and power-washed the chassis, and proceeded to build a steel frame on top of it. The frame bore a remote resemblance to the boxy G-Wagon and was meant to add rigidity and prevent the ice bodywork from cracking and falling onto the driver. Then, they added an old engine and checked the electrics to ensure everything was in working order, and built a floor for the single seat of the driver.

For the next seven days, Max, a local sculptor with some experience in working with ice, would carve and shape the body of the SUV out of ice: they had about 10 tons of it waiting outside, in massive blocks stacked in piles. Work was meticulous and almost around the clock: Max and an assistant cut, shaped, polished, and glued the blocks, which used the steel frame as the basis. At the end of the week, they added wheels and a steering wheel from an actual G-Wagon, color-changing LED lights, and gave the final shape to the side mirrors and the windows, the latter of which doubled as access points.

The finished vehicle weighed in at 5 tons and was still driveable. That last part is perhaps the most impressive because Barashenko opted against upgrading the suspension or modifying the drivetrain, saying the project was too much of a “mess” to bother with modifying the basics for it. So, while the Ice G-Wagon was drivable, it was also very slow and had to be operated with extra care to prevent the bodywork from cracking due to vibrations over bumps.

At the end, the ice SUV was loaded onto a platform and, after a short but slow and “nerve-racking” journey, was put on display at a local park. Needless to say, the fact that it was made of clear ice and had underbody and roof lights turned it into a real sight, with people of all ages getting close to it for a better look.

The entire build process is summed up in the video below. It’s all that’s left of the Ice G-Wagon (*the metal chassis doesn’t count) because it “tragically melted in April 2018.” Pour one out for this old UAZ that got its Cinderella moment as the coolest G-Wagon tribute ever built. 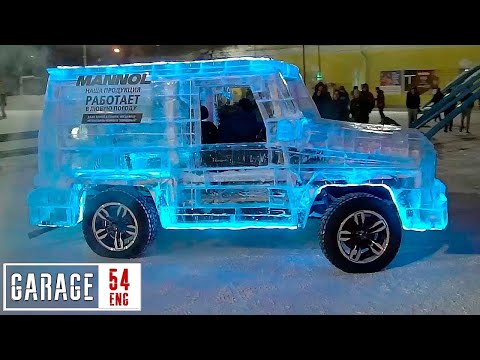