1 1953 Cadillac Wagon Is a Mysterious Field Find, Unexpected Surprise Under the Hood

2 The Fascinating Story of the 1948 Norman Timbs Special, an Iconic Homebuilt Custom

3 Hirohata Merc: The Story of the Most Influential Custom Car Ever Built in the U.S.

In 1952, the Italian carmaker surprised the automotive world when it added a thoroughbred sports car to its mundane vehicle lineup. Dubbed 8V (or Otto Vu), it was produced in less than 120 copies, a handful of which were passed down to local coachbuilders who made the unconventional Fiat even more impressive.

In 1899, Giovanni Agnelli and a group of wealthy businessmen founded Fabbrica Italiana di Automobili Torino (FIAT). Less than a century after that, the company became one of the biggest names in the automotive industry, gathering legendary Italian brands such as Ferrari, Alfa Romeo, Lancia, and Abarth under its corporate umbrella.

Despite that, Fiat vehicles have always been tailored for the masses, with reliability, practicality, and competitive pricing being prioritized over performance, luxury, or a breathtaking design.

During the 1930s, this philosophy gave birth to the original Fiat 500, known as "Topolino" (Italian for little mouse), a tiny city car that was among the company’s most successful models from its introduction in 1936 and all the way to the mid-1950s when it was replaced by the even more popular, Nuova (new) 500.

However, during the Topolino era, Fiat surprised everyone by releasing one of its most unconventional models, a thoroughbred sports car with V8 power.

The year was 1952 and the event chosen for the car’s public debut was the famous Geneva Motor Show. Accompanied by the sound of jaws dropping to the floor, the Italians showed the world that they were more than capable of building a rival for the likes of Alfa Romeo, Ferrari, or Maserati when they pulled the veil off the gorgeous 8V.

The pet project of engineering wizard Dante Giacosa and lead designer Luigi Rapi, the Otto Vu was a lightweight two-door coupe that shared almost no parts with other Fiat-badged production models.

Built alongside Turin-based tuner and sports car manufacturer, Siata, its chassis featured a fully independent suspension system and drum brakes all around, while power came from a small, yet innovative 2.0-liter V8 developed in-house by Fiat.

Although it initially made 104 hp and up to 125 hp in later iterations, the powerplant was way ahead of its time. An all-aluminum unit that featured a forged crankshaft, overhead valves, a finned oil sump and two twin-choke Weber 36 DCF 3 carburetors., the 70-degree V8 had racing written all over it.

As fascinating as it was, the 8V never became the commercial success that Fiat was hoping for but, it did become a fearsome competitor on the track, dominating the Italian GT championship’s 2.0-liter class between 1954 and 1959.

Apart from that, the long-forgotten story of the Otto Vu has another interesting chapter. Out of a total of 114 units produced from 1952 to 1954, almost three-quarters were shipped to some of the best Italian coachbuilders where they received custom bodies. Carrozzeria Zagato got a hold of 30 examples which were known as 8V Elaborata Zagato, Vignale also worked their magic on Fiat’s sports car, but the most famous and exquisite variants came from Carrozzeria Ghia.

The story goes that a wealthy enthusiast who wanted to compete at the 1953 Mille Miglia race with his Alfa Romeo 1900 commissioned the Turin coachbuilder to design a one-off body that would give him the aerodynamic edge.

Technical Director Giovanni Savonuzzi was tasked with transforming the Alfa and inspired by the era’s popular Jet Age design, the visionary stylist put together a stunning body with a surprisingly-good drag coefficient.

Soon after this custom Alfa left their shop, American designer and longtime customer Paul Farago, who got wind of Savonuzzi’s latest creation, asked Ghia if they could replicate the design on an 8V chassis.

In desperate need of funds and faced with an offer they couldn’t refuse, the company agreed and Savonuzzi got to refine his design on the backbone of the Otto Vu, giving birth to not just the most beautiful vehicle to don Fiat badges, but one of the most stunning sports cars ever created.

Characterized by an elongated front end with a sharply scraped windshield, rounded fenders, and a missile-like beltline, that led to sharp, jet exhaust-like tailfins at the rear, the car was christened 8V Ghia Supersonic.

Farago, who was extensively involved with Chrysler’s styling department, was so pleased with the outcome that he convinced the Detroit carmaker’s management to strike a deal with Fiat and Ghia for a limited run of around 35 Supersonics that would be sold in the U.S. through Chrysler’s dealer network.

With a Siata-developed chassis, an innovative 2.0-liter V8 that proved their worth on race tracks all over Italy, and an incredibly sophisticated coachbuilt body, the Supersonic was considered one of the best sports cars in the world by those in the know. Sadly, the production run was hampered by several issues, mainly the engine’s questionable reliability, so in the end, only 15 cars were completed.

Each subtly different than the other, most of them made their way across the Atlantic where they continued to turn heads on both road and track for decades to come.

These days, the 8V Ghia Supersonic is considered by many to be one of the most beautiful cars ever built. Cues from Savonuzzi’s design could later be found on the Volkswagen Karmann Ghia, Volvo P1800, as well as American legends like the Chevy Corvette or the Ford Thunderbird.

Fourteen of these masterpieces have survived and they continue to fascinate the hearts and minds of both the very few who knew about their existence and those who have recently discovered them.

One of these examples has been auctioned by RM Sotheby’s last month (August 2022), fetching no less than $2,040,000 which makes it the most expensive Fiat of all time.

Footage of this amazing car is scarce, but you can see and hear one revving up and leaving the 2018 Rodeo Drive Concours d'Elegance in the YouTube video below by Exotic Affinity. 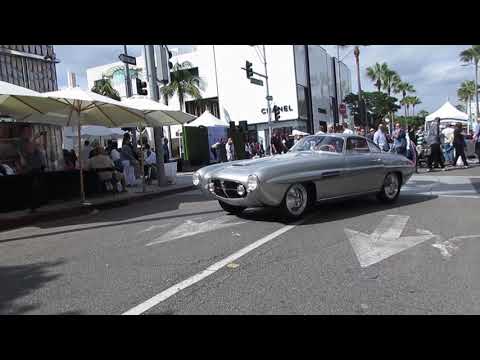