2 A Rare, Possibly Unique Victorian Mobile Photography Studio Is Up for Sale

3 The First-Ever RV: The Gypsy Van, a 1915 Landyacht With Rooftop Garden and Hot Water

5 The 1928 Pierce-Arrow Fleet Housecar Is What Fancy RV-ing Was All About
Car video reviews:
Coverstory

The most enduring inventions are those born out of necessity. If proof of that is still needed, look no further than the iconic Covered Wagon trailers, the first production travel-trailers in the United States, which both created and dominated a new segment of the market for a decade.

These days, we talk a lot about digital nomadism, long-term life on the road, and RVs that have become permanent residence to city-dwellers sick of city life and willing to take that giant leap to explore their surroundings, minimize their footprint, and live more adventurously. Perhaps all these wouldn’t have been possible without Detroit bacteriologist Arthur G. Sherman, who created what is considered the first production travel-trailer in the United States.

It all started with one awful camping trip in the late 1920s and Sherman’s determination that he’d never have to go through it again. On one of his trips, Sherman had to camp in heavy rain in a trailer-mounted tent that was popular at the time. The heavy rain made setting up the trailer-tent up a nearly impossible chore, so, once back home, he set out to create something better: something that would do away with the need for a set-up.

He called that something the Covered Wagon, a not-so-subtle nod to the horse-drawn covered wagons that inspired it. Sherman rented out a garage and hired carpenters, and together they created a wooden trailer that would house all the creature comforts of a home on the road. The prototype for the Covered Wagon was shown at the Detroit Auto Show in January 1930, where it made quite a splash. The wheels had been set in motion.

Initially, the Covered Wagon Company offered a variety of trailers with varying price points (from $395 to $1,200, respectively, $6,840 and $23,400 in today’s money), but what they all shared in common was the fact that there was something for everyone. These were the first affordable trailers for the masses, but the rich could also order custom units that would fit their more demanding tastes. Because of its wide appeal, the Detroit, Michigan-based company is often compared to the Ford Motor Company and its Ford Model T: the Covered Wagon was the Model T of the travel-trailers.

In the first year after that successful display, Covered Wagon sold 117 trailers, and production continued to pick up at an unexpected pace, especially considering the hardships of the Great Depression. In 1934, with demand still growing, Sherman expanded production, opening another assembly line in Mount Clemens. In just two years, more than 1,000 units were rolling off the production line on a monthly basis: at its peak, Covered Wagon was producing 50 trailers daily. By this time, Covered Wagon offered just three trailer models, the Master, the DeLuxe, and Custom.

The late ‘30s were marked by soured labor relations at the company, and the start of World War II brought a change in operations, as trailer production was abandoned in favor of truck cargo body production. In the spring of 1945, Covered Wagon was awarded the Army-Navy “E” award for high achievement in war production, and by the middle of the same year, production ceased altogether. In December 1945, the Mount Clemens assembly line no longer made Covered Wagon trailers but Ironite ironers.

Of the thousands of units of Covered Wagons built in a decade, only a handful survive to this day. According to Brian Grams, entertainment director at the Volo Auto Museum in Volo, Illinois, only six units remain, two of which are housed under their own roof and another at the Recreational Vehicle / Motor Home (RV/MH) Hall of Fame Museum in Elkhart, Indiana. In fact, the ‘34 unit shown in the video at the bottom of the page was bought from the RV/MH Hall of Fame and restored by Flyte Camp: it is believed to be the only custom unit remaining today, and it’s impressive for how luxurious it was.

The Covered Wagon trailer carved a new segment of the market and then dominated it for a decade. As a pioneering product, it introduced several industry firsts, like electric brakes, the Shermanite waterproof exterior (which was galvanized steel stamped to plywood), sinks with running water, a lead-lined icebox, a Readykook camp stove, a Buddy wood-burning stove, and a sofa that became a bed at night. While it didn’t have holding tanks, it had a sink in the bathroom and another one in the kitchen, and a toilet.

Custom versions, like the one shown in the video, had a lengthier wheelbase, a leatherette-covered exterior, and a telephone to speak to the driver in the towing car, as well as a full bar and the most luxurious furnishes and finishes.

For a first travel-trailer, and especially one made of wood, the Covered Wagon was definitely a nice way to move around. 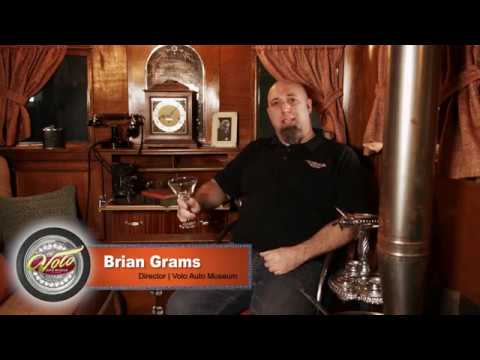