Allegedly capable of much more than that, the M12/13 was a race-bred turbocharged straight-four that holds the title of Formula One’s most powerful engine.

Remembering the 1,350-HP Turbocharged Four-Cylinder Built by BMW During the 1980s

Designed by Paul Rosche, the legendary engineer behind the Bavarians’ most successful powerplants, such as the McLaren F1's S70/2 V12, the M12’s architecture dates back to the 1960s, a decade during which multiple race-bred versions of the M10 four-cylinder were used in various competitions.

In 1973, one such version, codenamed M12/7, was specifically developed for Formula Two. Naturally aspirated, the 1,991cc (2.0-liter), 300-hp motor fitted inside a March Engineering 732 would go on to win its maiden race, then seven more, finishing the season in first place. That would be the first of six F2 championships won by M12/7-powered racecars from 1973 to 1984.

During the late 1970s, BMW was also competing in the U.S. IMSA series, but it struggled against rivals Porsche and their turbocharged boxers. To solve this issue, the North American branch of McLaren was commissioned to build a turbocharged variant of the M12/7.

Back home, engineers were also working on a similar design for a new Group 5 racer that would replace the iconic 3.0 CSL. Nicknamed “Flying Brick” the E21 3 Series ended up using a 1,428cc (1.4 liters) turbocharged mill derived from the F2 unit. Unfortunately for the German manufacturer, neither one of them proved very successful, yet both M12 versions laid the groundwork for the most powerful Formula One engine of the original turbo era, and arguably the most powerful in the history of the competition.

The year was 1981, and although Renault had been using turbos in the world’s most famous open-wheel series for years, the naturally aspirated Ford-Cosworth DFV was still the best powerplant around. However, the French team’s turbo V6 was beginning to pose a real threat, helping them secure third place in the Constructors' standings. During the season, numerous teams ran experimental turbo engines in practice seasons, and among them was Brabham (officially Parmalat Racing Team), who tested the new BMW M12/13.

Built around a cast-iron block shared with the mass-produced M10, the four-cylinder came with a Bosch electronic fuel injection system and a big KKK turbocharger that allowed it to make up to 850 hp in qualifying trim.

Legend has it that the blocks used for the M12/13 were sourced from various M10-powered BMW models that had covered over 100,000 km (62,137 miles). The theory was that a used one was basically tried and tested, so any casting defects could be easily ruled out.

To make things even more outlandish, it is said that Rosche ordered his engineers to leave the blocks outside for several months, exposed to the elements, and instructed the employees to urinate on them. Yes, I know, this sounds crazy, but swordsmiths of old used urine to quench the steel blades, so, if the rumors are true, there was some kind of method to Rosche’s madness.

Regardless of these rumors, the engine showed a lot of promise during the 1981 tests. Brabham’s leading driver, Nelson Piquet, managed to win the Drivers’ title that year using a DFV, but the team eventually decided to run BMW units part-time for 1982 in Piquet’s car. A single win and multiple reliability issues followed, but engineers continued to fine-tune the powerplant which they were planning to use full time in 1983.

Capable of producing 1,280 bhp (950 kW) in qualifying spec and 850 bhp (630 kW) for the races, the 1,499cc (1.5-liter) was mounted longitudinally in the Brabham BT52. Unlike Ferrari or Renault who were utilizing twin-turbo V6 engines, the M12/13 had one less turbo, fewer cylinders, and valves, so it generated less heat. This allowed Brabham’s Gordon Murray to design the BT52 with smaller radiators and a slicker body, giving the car an advantage when it came to aerodynamics.

Reliability issues persisted throughout the 1983 season, but mostly in the unit that powered Riccardo Patrese’s car. Despite that, Brabham finished the year in third place, while Piquet earned his second Drivers’ trophy, edging Renault’s Alain Prost by two points, and becoming the first person to win the title in a turbocharged car.

Used by Brabham, ATS, Benetton, and Arrows in the following years, the M12/13 never managed to repeat the success of 1983. BMW eventually retired from Formula One in 1986, continuing to supply the motor to Brabham throughout 1987. That year Swiss manufacturer Megatron brought the rights for its design and provided rebadged units to Ligier and Arrows. The latter would be the last team to use the M12 in Formula One, during the 1988 season.

Basically a one-year wonder in terms of success, this German masterpiece was the most powerful F1 engine of all time, but its exact output is the subject of a decades-long debate. It was allegedly clocked at 1,280 (1983) and 1,350 hp (1986) in qualifying, however, according to Paul Rosche’s calculations, it was capable of well over 1,400 hp.

Peak output aside, Gerhard Berger and his M12/13-powered Benetton B186 earned a place in the history books by reaching 352.22 kph (219 mph) during the 1986 Italian Grand Prix at Monza. This was the highest straight-line speed ever recorded by a turbocharged Formula One car at the time, a feat that has since been surpassed. The current record holder is Valtteri Bottas who reached 372.5 kph (231.461 mph) in 2016.

In the video below posted on YouTube by hardwarenoob0815, you can watch Berger shredding the Adelaide Street Circuit behind the wheel of the B186, considered by many the most powerful F1 car of all time. 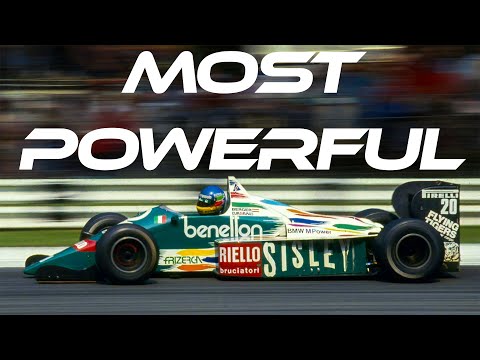