We’ve often heard how the Mustang Mach-E isn’t a real Mustang, but a question that we rarely hear in the automotive world is, well, what is the meaning of "real" in this context? Brian Reider of Regular Car Reviews makes a good point by going over every 'Stang from a technical standpoint.
7 photos

Championed by Lee Iacocca, the first generation can trace its roots back to the Falcon, a low-cost passenger car produced from the 1960 to the 1970 model years. The second generation—also known as the worst Mustang of them all—is derived from the notoriously bad Pinto that had a tendency to burst into flames in a rear-end collision because of the fuel tank’s position.

The Blue Oval made amends with the Fox vehicle architecture, which premiered in the Fairmont for 1978 and ran through 2004 if we include the Fox-derived platform of the SN-95. Loosely based on the DEW platform, the D2C of the fifth-generation pony car was replaced by the S550, the closest Ford came to a dedicated set of underpinnings for the Mustang.

Now that we’ve finished the history lesson, the “not a real Mustang” argument clearly doesn’t hold water. Enthusiasts are most likely upset about the body style of the Mustang Mach-E, which is understandable at first glance. But looking at the bigger picture, they wouldn't have gotten up in arms over the Mach-E if the Ford Motor Company had morphed a Mustang sedan concept from 1965 into a production car. The same can be said about a wagon-bodied concept from 1966, a mid-engine design study with the Boss 429 engine, and the Mazda-based Probe that was originally intended to replace the Fox-body Mustang instead of the SN-95 Mustang.

Look, I’m not as excited about the Mach-E as I’m about a Coyote V8-engined pony car, but the times have changed, and we’ll have to roll with it as long as there’s demand for an all-electric crossover with the pony logo. 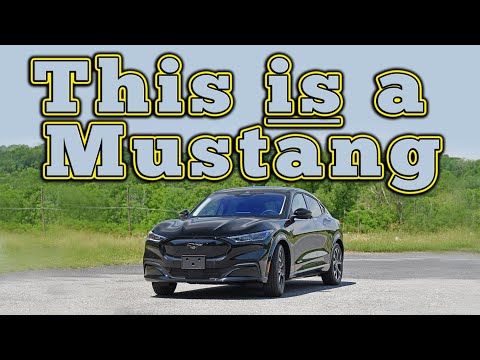