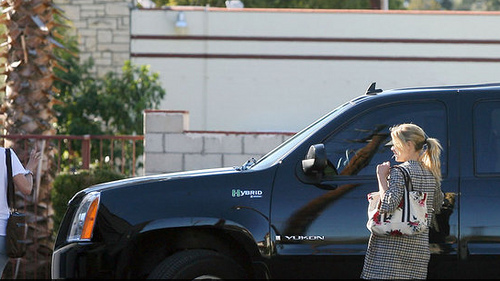 Some celebs have a problem with the size... of their cars. We don't actually get it why so many female stars choose big ugly cars that consume a lot of fuel instead of deciding upon smaller and more good-looking vehicles.

This is the case of Reese Witherspoon as well who has been spotted by the paparazzi  in her black ‘hybrid’ GMC Yukon and the photos got in the hands of the guys from Celebritycarsblog.com. The car is not only ugly and totally inappropriate for a lady like her, but it also uses way too much fuel to be bought for daily use. Honestly, we had high expectations from Witherspoon, but she just seems to be obsessed with a car that brings her no good.

Reese Witherspoon is a well-known American actress and film producer, who has established herself as one of the highest-paid Hollywood stars in recent years. She is best known to the public for her roles in three 1998 movies: “Overnight Delivery”, “Pleasantville”, and “Twilight”. The very next year, she appeared in the critically acclaimed “Election”, which brought her a Golden Globe nomination.

One thing is sure: she doesn't lack the money to buy... let's say a Mercedes SL which would a better choice for a lady. Yet, she might lack good taste. Or is she using a huge car as a compensation for the minuses in her life? And that brings us to the real question: what kind of minuses?