Tesla and its cars might be just as renowned for their innovative EV technology and outstanding performance (for sedans and crossovers) as they are for the inherent early adopter flaws and level of ICE fans hate. Even when it does not win everything, it does not matter, apparently.
33 photos

Take the recent video (embedded below and uploaded on May 21st, 2022) from the videographer behind the Drag Racing and Car Stuff channel on YouTube, who has prepared a feature (mostly) centered on a crimson Tesla Plaid, for example. Just a glance at the comment section will first show some love/hate replies towards the high-performance EV family sedan… And only afterward a bit of appreciation for the vehicle that was quicker than a mighty Plaid!

So, with that being said, we can all discard the useless love/hate banter and accept the stark reality: EVs are here to stay, they are inherently flawed (like the people building them and everything around us), and they will only get better, and we could all enjoy them as part of everyday life and its many wonders! Seriously, now let’s focus on the races, as those are equally feisty as people’s opinions.

The action takes place at Palm Beach International Raceway in Jupiter, Florida, and first involves the protagonist – a Tesla Model S Plaid dressed up in a lovely shade of red – ducking it all out with the mighty Suzuki GSX1300R Hayabusa. That is one of the last sports car/motorcycle representatives that does not fear the Plaid too much, and that’s obvious from the rider’s attitude during the initial skirmish.

So, even though it was the Plaid that first took like a rocket off the starting grid, the ‘Busa rider persevered and claimed 9.17s to 9.34s victory! Next, the Model S was probably determined to reclaim dragstrip supremacy but first had to wait until a couple of McLaren 720S supercars settled a dispute, from the 0:47 mark. Then, it was EV business as usual, no matter the opponent – so both the winning 720S and a cool-looking C5 Chevy Corvette did not stand a zero-emission chance. 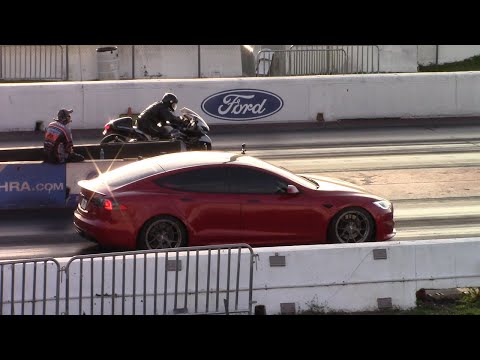