2 Used Harley-Davidson Night Rod Special Gets the German Touch, and a Huge Jump in Price

All Aboard the Hype Train: Chevrolet Silverado ZL1 Is the Muscle Truck the Brand Needs

Red SCC Harley-Davidson CVO Road Glide Was Someone’s $73K Steal, Must Have Been the Sound

Harley-Davidson is a bike maker for the masses. The current lineup is made in such a way as to suit both one’s needs and the size of their bank account, as you can get on the back of a stock American two-wheeler for anywhere between $11,000 and $41,000.
11 photos

At the top of the food chain in the current offering are, of course, the CVOs, those mighty beasts customized in-house by Harley to be much more impressive variants of their stock selves. The CVO Road Glide, for instance, sells from over $41,000, which is almost double the price of a normal Road Glide.

But, if one wishes, one can go even higher than the price of a CVO. And one of the easiest ways to do that is get in touch with the guys over at Southern Country Customs (SCC).

Based in North Carolina, this crew is headed by former NASCAR driver Rusty Wallace and describes itself as the go-to shop for full custom design and build, suspension and engine upgrades, and general tuning. And these guys are not for the masses.

SCC has been featured here on autoevolution before, and always with custom Harleys that cost an arm and a leg, or at least the price of two full-blown American muscle cars. The CVO Road Glide we have here is no exception.

Shown publicly in the summer of last year, it was priced at $73,467 and is now listed as sold on the shop’s website. That only means someone found it to be a steal of sorts.

Contributing to the decision to spend this much on a bike might have been the “world-famous” red paint that wraps around everything, the extended fuel tank or electric center stand. Or maybe it was the upgraded engine, SCC exhaust, or 26-inch front wheel. Or maybe, it was the sound the damn thing makes once fired up (you can hear it in the video below).

Whatever might have been, the reality remains that now, a $73k, red SCC Harley-Davidson CVO Road Glide is roaming American roads. 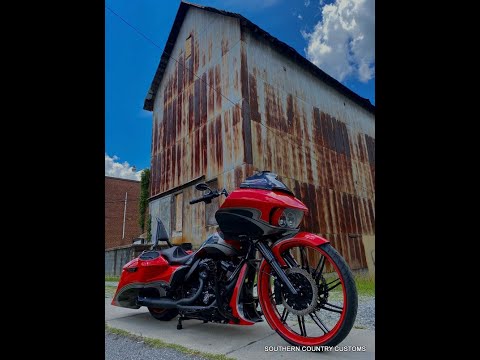