5 F1 Car Takes On a Spitfire in One of the Craziest Races You’ll Ever See
Car video reviews:
Up Next

Red Bull Is So, So Sorry for Unauthorized Drift Shoot at UNESCO Site

Last week, in a very bad (and in bad taste) move, Red Bull Ukraine openly defied local authorities and shot a commercial in a historic area that they had been specifically banned from. Red Bull is now so very sorry for that.
7 photos

News of the incident spread on social media, with the deputy mayor of Kiev, Ukraine, Kostyantyn Usov openly calling out Red Bull Ukraine for damaging Sofiyskaya Square, which is recognized as a UN World Heritage site. According to Usov, Red Bull wanted to shoot a new ad in the square, so it filed for permission, but local authorities shut the request down. The area is one with high pedestrian traffic but, more importantly, it’s one that must be protected from damage at all costs.

Authorities clearly believed drifting in the square would do damage to the area, and they were right. After the request was shut down, Red Bull Ukraine went ahead and filmed the segment either way, leaving tire tracks on the famous yellow clinker brick pavement and, according to Usov, damaging some 2,000 square meters (21,528 square feet) of it.

Once news of the stunt went viral, Red Bull Ukraine sent a team to clean up the area. A team of volunteers followed, with their efforts documented on social media.

In a statement to The Drive, Red Bull Ukraine says they’re so, so sorry, and that the plan was to clean up after themselves all along – even though they initially failed to do so. “We did not follow all the necessary procedures. We deeply regret this oversight on our part,” reads the statement. Apparently, you can call an intentional act of disregarding an official ordinance an “oversight,” a not-so-big oops moment.

“We greatly value the warm relationship we have enjoyed for many years with the city of Kyiv and are grateful for the opportunity to continue to demonstrate this,” the text adds.

The same media outlet notes that, of the two drivers brought in for the shoot, Conor Shanahan and Aleksandr Grinchuk, only Grinchuk has addressed the snafu, saying he was contractually bound to show up, drive and drift, and then go about his business. Rapper Alyona Alyona, who was in one of the two cars, is yet to say anything. 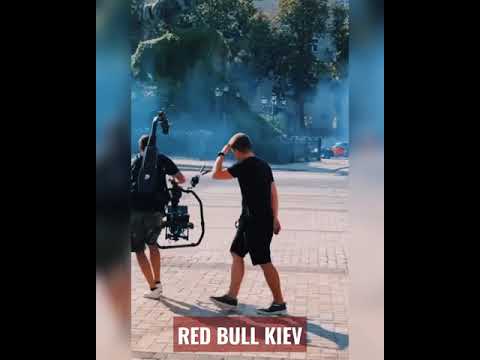