1 Lewis Hamilton Jumps Out of a Plane Ten Times for Fun, Calls It "The Best Day"

2 Two Red Bull Pilots Will Exchange Airplanes in Mid-Air, the Action Will Be Livestreamed

Elena Gorgan
As sponsor, Red Bull has done amazing work in terms of enhancing the appeal of a variety of sports that would have otherwise gone unnoticed by the general public. But Red Bull does seem to have a problem with following regulation or due process.
6 photos

The Federal Aviation Administration (FAA) is now investigating the latest Red Bull stunt, the Plane Swap event, that took place over the desert in Arizona on April 24 and livestreamed online for (paying) U.S. audiences.

Hailed as the culmination of a 10-year project, the brainchild of experienced pilot Luke Aikins and his cousin Andy Farrington, Plane Swap was exactly what its name sounded like: a stunt where they would fly two planes to an altitude of 14,000 feet (4,267 meters), jump out and then skydive into each other’s aircraft to land both safely.

The idea was that each aircraft, single-engine Cessna 182s, would nosedive empty for under a minute and before it reached 4,000 feet (1,219 meters), as the pilots changed cockpits. The feat had never been done before, so Red Bull was quick to present it as history in the making.

History will have to wait, because the mid-air swap was only partially completed. One of the pilots, Aikins, was able to skydive into the other’s aircraft, but Farrington wasn’t, so that empty Cessna crashed in the Arizona desert. Farrington was able to parachute himself to safety, so there’s that silver lining: unlike countless other record attempts, this one didn’t result in injuries or fatalities.

Still, the FAA is none too happy about it, CNN reports. Apparently, Red Bull applied for permission from the FAA in February this year, detailing the measures they’d taken to ensure everyone’s safety, including various test runs and choosing a remote location for the actual event.

One day before the event, the agency warned the organizer against leaving the planes empty, saying that they could “continue to perform this demonstration in compliance with FAA regulations by including an additional pilot for each airplane.” Red Bull didn’t, and ran the event according to the original plan.

The video below sums up the Plane Swap stunt from start to finish. No word yet on what kind of punishment Red Bull might face once the FAA investigation concludes. 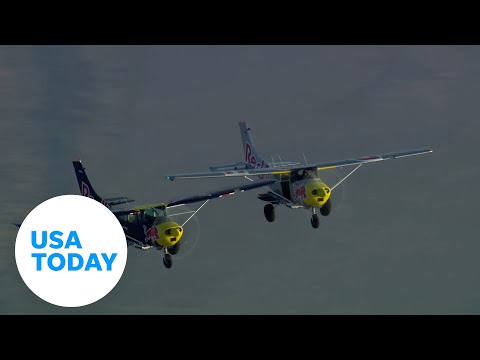