1 2022 BMW M135i xDrive Becomes More Dynamic With Updated Suspension, Not Much Else

Home > News > Tuning
Sebastian Toma
The folks at Auto Top NL have tested another BMW M135i offered by one of their viewers. The blue hatchback left the factory black and has been wrapped in blue after it was rebuilt by its owner following an accident. With the rebuild, the vehicle also got some extra attention under the hood.
6 photos

Starting from a stock N55 unit and retaining the pneumatic wastegate but going for a hybrid turbocharger and many other mods, the owner managed to obtain 500 horsepower and 820 Nm (ca. 604 lb.-ft) of torque.

The resources are sent to all four wheels through BMW's xDrive all-wheel drive system and the ZF 8HP automatic transmission. As you will observe in the video, the result is a quick car. With an IPE (Innotech Performance Exhaust) exhaust system, the sound matches the performance.

The exhaust has a built-in valve but is also equipped with a bypass, so the German hatchback can be made louder only when the driver desires it. The sound is amplified with an Eventuri intake, while things are kept cool with the help of a Mosselman Oil Thermostat.

The latter is a recommended modification for all N55 units, as they tend to reach high oil temperatures even in normal driving conditions, as Mosselman reps explain. The folks at Auto Top NL have previously experienced similar issues, which is why they also went for the same type of oil thermostat.

In the future, the owner of this model wants to install a water-methanol injection system, which will allow for a more aggressive timing and more boost. Once these mods are carried out, they will lead to an estimated 560 horsepower. But that is a different matter altogether.

We already know that the engine received a different crankshaft, but there is no word on the pistons and rods employed in this unit. The owner has rebuilt the engine and has changed "anything and everything" required, so this sounds like a long list that led to a significant expense. A custom ECU tune on the dyno is a must for modifications like these.

Another must-have mod fitted to this M135i is an uprated fuel pump, which helps the N55 quench its thirst even when driving all-out on the Autobahn, as you can observe below.

This degree of power increase involves multiple other modifications that are not mentioned in the video, but those interested in something like this should check out dedicated forums and specialized tuners. 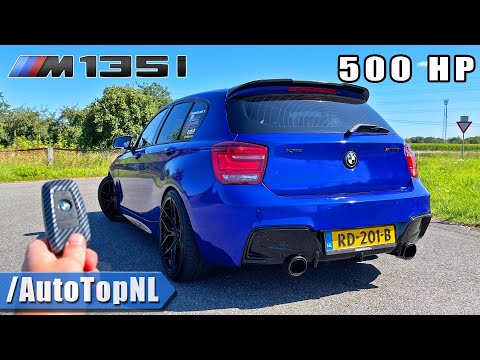