Home > News > Renderings
Aurel Niculescu
Back in 2014, Lamborghini presented at the 2014 Paris Motor Show its Asterion LPI 910-4 hybrid concept car as the first step into the electrified realm. Alas, it was not meant to be, and instead, we got the Urus SUV.
20 photos

Developed as a cleaner energy technology demonstrator and named after a Minotaur (instead of a real, fighting bull), Lambo’s Asterion probably had all the makings of a great Italian grand tourer. Including a 5.2-liter V10 and enough electric motors to warrant the LPI 910-4 designation. Still, that one did not become Lamborghini’s first production hybrid.

Instead, the honor was postponed for something that came out half a decade later, the Sian FKP 37. A reworked Aventador SVJ with a gearbox-integrated electric motor and supercapacitor energy storage instead of “conventional” Li-Ion batteries. It was probably easier to digest by Lambo purists. Especially since it also had a futuristic design, worthy of its trendsetter vibes.

Interestingly, someone thought both Lambo’s Asterion and Sian (particularly the Roadster) might do wonders if they get mashed up. But with a retro-modern twist, as the virtual artist behind the SRK Designs digital label has taken Lamborghini's hybrids and stretched them into a neo-vintage sedan that might fit a fully EV powertrain. One that would also be worthy of an Espada nameplate revival.

Unlike other classic Lamborghini models contemporary to it, like Miura and Countach, the Espada was envisioned as a luxurious four-seater grand touring coupe. So, not chasing extreme performance but rather comfort and style might be a tad more fitting. Especially for a hulking EV that needs to fight battery inertial mass when attacking even the slightest of corners.

And after Lambo had its way with the Urus SUV and finally tread lightly onto electrified territory, perhaps it’s high time they developed a fully-fledged electric vehicle. Of course, it is anyone’s guess if this Espada revival as a four-door EV sedan with Asterion and Sian DNA will be it. Our two cents are that it won't. Look at it, it is way too quirky even for Lambo! 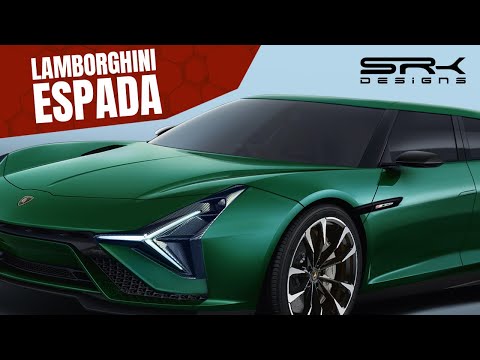