2 How is the Build Quality on the First Batch of Rivian R1T SUVs Delivered to Customers?

5 Consumer Electronics Show 2022: What To See & Where To Go
Coverstory

Home > News > Car Profile
Stephen Rivers
We've all seen the Rivian R1T and the many reviews and awards that have followed its triumph as the first production EV truck. At the same time, many have wondered how these vehicles will fare in the real world. Now we have a customer's testimony of what they love and what they don't after living with the R1T for a few weeks.
6 photos

This video comes to us from the very small YouTube channel TedActuallyTalks and features a dark gray R1T. The owner says they've had it for a couple of weeks and wanted to provide their opinion. It's mostly good too.

Overall, the Rivian feels well made at this point in the ownership experience. There are a couple of glaring concerns, though. First, the tonneau cover is non-functional. This seems to be a recurring issue on R1Ts. No details as to why in this instance, but regardless, that's not a great look two weeks into ownership.

The other concern is the weird panel gap on the seat trim. The owner points it out and mentions that it's a small thing, which it is, but you do have to look at it every time you enter the car. That's not the kind of thing you want greeting you when you get into your brand new $70,000 truck.

Of course, there's a lot he likes too. Most notably, the software. Not only does it react super quick, but it's very deep. Amazon Alexa can be called upon to adjust things like media or climate control. Then there's the charge state information.

It's so deep that it can tell you based on your personal history of driving what kind of range you're likely to have. It can even augment those numbers based on the driving mode you'd like to use and show them to you all on one screen so that you can pick the one you'd prefer.

Then it can show you what kind of charge you should aim for based on your planned driving for the day or the next day. Two weeks isn't long enough for us to know anything really concrete about the Rivian R1T, but for now, it looks like it really is the first great EV truck. 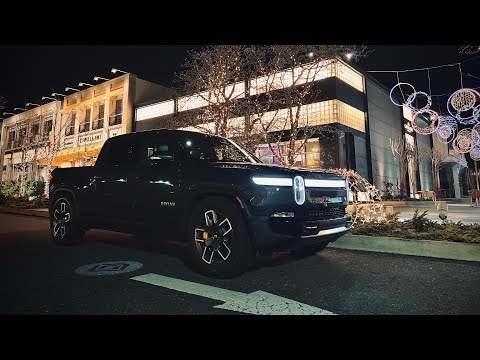