2 Segway Launches Its Premium KickScooter P Series, It Is Meant to Go the Distance Smoothly

3 EXT E-Kick Scooter Adapts to Your Riding Needs, Can Extend and Retract Its Wheelbase

5 Navee N65 Is a Foldable and Affordable Electric Kick Scooter, Offers 40-Mile Range
Up Next

SEAT Sold One Million Crossovers in Six Years, Can You Point Out Their Best-Selling Model?

Home > News > Free-Roaming Wheels
Cristina Mircea
Back in March, Razor unveiled the Icon electric two-wheeler, an adult version of the original Razor kick scooter that got all the kids hyped in the early 2000s. The scooter is now finally making its retail debut.
8 photos

When it launched on Kickstarter back in the spring, the Razor Icon turned out to be just as big of a success as the original kick scooter, getting fully funded in just two days. And the great thing about the wheeler is that, unlike its predecessor, which was seen as the ultimate childhood ride of the early 2000s, the new and upgraded scooter is now also suitable for adults.

The manufacturer just announced that the Razor Icon has become available at retail, following its successful Kickstarter campaign. You can get the e-scooter in four colors: black, blue, red, and pink.

Razor’s Icon has been reimagined to also offer grownups a fun and safe ride. It comes with a folding design that makes it a great commuting vehicle, easy to transport in cars and buses. The scooter features an aircraft-grade aluminum frame, is equipped with 8.5” airless tires, a LED headlight, and a brake-activated taillight. It tips the scales at 26.5 lb (12 kg) and offers a maximum payload capacity of 220 lb (100 kg).

Now on to the most interesting upgrades of the kick scooter: the new, adult Razor Icon packs a 300W hub motor that can take riders as fast as 18 mph (29 kph). A 36.5V lithium-ion battery powers the Icon and offers a range of 18 miles per charge.

Razor Icon is now available to order for $600. You can get it on the manufacturer’s website or at Target, although the latter only has it available in red. And if you’re interested in other adult scooters from Razor, you can also check out the recently launched EcoSmart Cargo, the C35, E300 HD, or the E Prime III, to name just a few. 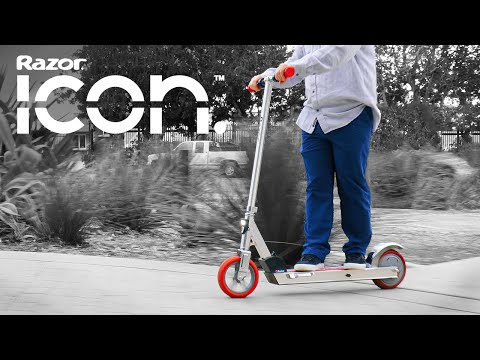