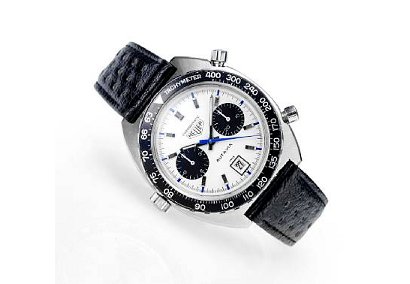 Bonhams auction house has recently reached an agreement with renown watch company Tag Heuer to set up a special sale in order to celebrate the watchmaker’s 150th anniversary. The 'Haslinger Collection' of rare Heuer watches will therefore go under the hammer on December 15 at Bonhams New Bond Street, London.

"These 81 watches in the collection represent the 'best of the best' which is why TAG Heuer are happy to showcase highlights of them as part of their anniversary celebrations. The watches range in value from £1,500 to £15,000," Paul Maudsley, Director of the Watch Department, said in a release.

The single owner collection aims of representing the best of Heuer. Comprising over one hundred lots, it includes many of the most iconic models such as the Silverstone, Autavia, Carrera, Daytona and Monaco. According to Bonhams, many are new-old-stock and it therefore represents a once in a lifetime opportunity to own such an example.

However, Tag Heuer has also created a unique watch especially for this auction. It is based on the newly launched Silverstone model and the dial will incorporate Jack Heuer's signature, making it a one-off.

All proceeds following this auction will go to the Green Cross International charity. Arno Haslinger will also donate his original Silverstone to be auctioned for this cause and Bonhams will add a further 20 percent to the hammer price and an additional £5,000 in support of the charity.

There will also be a preview of the collection comprising several highlights on display as part of the TAG Heuer 150th Anniversary world tour, which kicked-off yesterday and will end at the Paris Motor show on October 2-17.