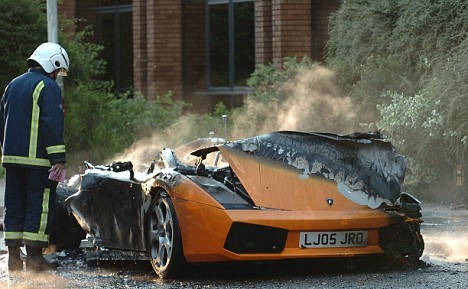 Enough with all those Ferraris that catch fire out of the blue! It’s Lamborghini time... A 2005 Lamborghini Gallardo, to be more exact, that burst into flames after it pulled up outside a nightclub in Petersborough, UK, in front of hundreds of people gathered at the scene.

According to the Daily Mail, there are only a few hundreds models on the roads of Britain, so we may say that this was a rare one.

“It was engulfed in flames and there were loud popping noises all over the place as the windows and the tires exploded. There was no end of people gathered round, something like 150 people. A lot of them were stood there filming it on their mobile phones,” said Colin Jeffery, assistant manager at the Solstice bar, nearby the incident scene.

Luckily, both the driver and the passenger managed to get out of the car and survive without injuries. Unfortunately, even though they immediately called 999 and the firemen arrived quickly at the scene of the incident, the car was completely damaged.

The five firefighters spent about 20 minutes to bring the flames under control, as its carbon fiber and alloy construction made it burn more intensely. The cause of the fire is still under the question mark, but police has started a detailed investigation.

“It was a bit of an unusual one for us because it was quite different from the usual Fiestas or Escorts that we get called to. Quite often, you get explosions with burning cars which makes it difficult for us to get close enough to fight the fire. In this case, it was the tires and the shock absorbers in the suspension that were going,” said Chief volunteer fire officer Tony De Matteis.

According to Antony Hawkes, the chairman of Lamborghini Club UK, there are only 5,000 to 6,000 Gallardos in existence and only a few hundred in the UK. The cars are priced between £115,000 and £130,000 when purchased brand new, while second-hand prices usually start from around £70,000.

“It’s heartbreaking for whoever owns it - and looking of the pictures of it burned out is quite a distressing sight,” said Mr Hawkes.