Sebastian Toma
An unrestored 1968 Porsche 911 will be for sale at auction this weekend in Silverstone Auction's RAF Museum London Season Opener. The vehicle in question is a two-owner MY 1969 Porsche 911E that has a rare transmission, all-original book pack, and was initially acquired by a member of a diamond mining family.
12 photos

Just like the representatives of the auction house have noted, the vehicle will only be original once. As we noted in the first paragraph, this 911E, a rare model in itself, comes in a right-hand drive configuration. Moreover, it has the Sportomatic transmission, which means it is a two-pedal car with a transmission that is rare today.

Its mileage sits at 52,283 miles (84,141 km) from new, and it is corroborated by the MOT history. There are also several stamps in its service history from its first years of operation, which show it was used most during its time with the first owner.

Despite almost 60,000 miles (ca. 96,561 km), the vehicle still has its date-stamped Fuchs wheels, its original Bilstein jack, full tool kit, and the book pack it got when it left the factory. The latter package includes the Sportomatic supplement, which is something that not many vehicles still have years after they were sold.

The exterior color is called Light Ivory, and its interior is Black/Pepita Leatherette, just like factory documentation – in the form of a 1968 Porsche Kardex order docket, as well as the Porsche Certificate of Authenticity note. The transmission is original, and this is a numbers-matching car, and its owners have even kept the original Motorola radio.

We have noticed that the advertisement notes that the vehicle had left the factory with two headrests, both for the left and right seats. However, as you can see in the photo gallery, just the driver's seat has its headrest fitted. That is just a minor flaw, but the part may be available with the vehicle when sold.

Its first owner was Lady Pamela Oppenheimer, who was a member of the De Beers family, which is renowned for mining and selling diamonds. The acquisition was made in London at the AFN Porsche stand at the Earls Court Motor Show back in October 1968. Ownership was retained until 2005.

The MY 1969 Porsche 911E is what the company describes as a B-Series model, which involves certain improvements over its predecessors, such as an extended wheelbase. There is also a magnesium engine case, and smaller batteries were spread in a dual configuration to improve weight distribution, as well as standard Bosch mechanical fuel injection (only for some models, 911E included).

The Type 905/13 Sportomatic transmission was offered as an optional extra on the 911 starting with 1967, and it was a clutch-less manual unit. To change gears, the driver has to gently pull the gear lever, which activated a micro-switch that opened a pneumatic valve that operated the clutch. The latter was engaged again when the leaver was released.

Unlike other manual transmission vehicles, the Sportomatic models came with a torque converter instead of a flywheel, which allowed stopping without stalling or the need to manually engage neutral.

The torque converter also operates as a torque multiplier, and that meant that the vehicle could pull away from standing still in any of its gears. Instead of the usual gear indications, Sportomatic cars have L, D, D3, and D4, as you can see on its cap. There is also a park mode, marked P, as well as reverse, which is marked R. To drive off, Porsche recommended starting in D, while the L was reserved for slopes or low-grip situations. 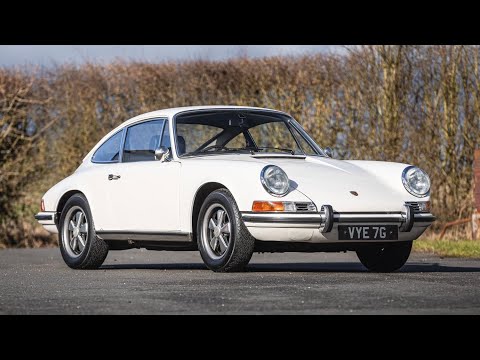 For details on how the Sportomatic transmission operates, a PDF of the owner's manual was uploaded as we found it on an American page dedicated to Porsche Clubs.

For illustration purposes, several images from the original listing on Silverstone Auctions were uploaded to the photo gallery.