Blue Oval aficionados know very well that somehow the planets aligned every time Ford and/or Shelby decided to do something GT350/500 special with the Mustang. And here is an S-197 I example of it.
21 photos

Shortly after Ford’s decision from 2005 to revive the Shelby nameplate for high-performance versions of the fifth generation, its SVT performance division collaborated with Carroll Shelby’s Shelby American company for a limited quantity GT500. Performance and vintage flair, combined.

Sure, around 10k units per year are not exactly collector grade. But the partnership between SVT and Shelby sure is. Also, the rarity of the 2007 to 2009 GT500 models, combined with the supercharged Modular 5.4-liter V8 and Tremec six-speed manual transmission might add to the recipe. And cook up an attractive high-performance plate.

Just in case a 2008 Shelby GT500 was on the bucket list, here is an Alloy Clearcoat Metallic (dark gray) unit offered with a mere 2,058 miles (3,312 km) on the odometer. Also packing twin-white racing stripes over a black interior, this coupe resides proudly in the inventory of Grand Rapids, Michigan-based Garage Kept Motors.

Over there it entices us with dreams of pristine Shelby and SVT condition, apparently oblivious to the fact that we are dealing here with a car that’s already 13 years old. According to the description, everything looks flawless. The Shelby, Cobra, SVT, and Ford details. The factory 18-inch, ten-spoke machined aluminum wheels, the lettering, the interior brushed metal trim, or embroidered Cobra logos, among many others.

But, more importantly, everything is also up to snuff under the hood. There, a 330ci V8 will provide the upcoming new owner with visions of performance road trips at the tip of the manual transmission, RWD, and 500 ponies. Of course, that’s only going to happen if the buyer accepts the bill. And, naturally, there is no trifle asking price, as the dealership wants exactly $51,900. 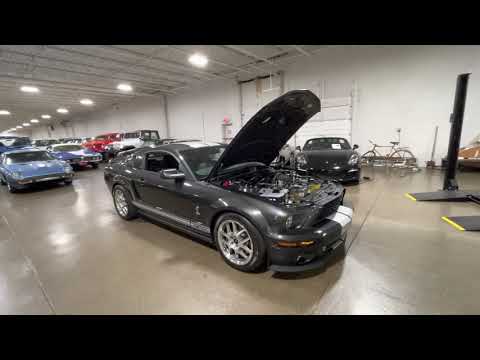