We fully understand that Christmas celebrations are a bit behind us. Still, seeing this red Comet Caliente with the white top down immediately got us thinking of setting up a Miami Beach stake-out for Santa’s other reindeers for the next holiday season. After all, you can never start too soon when it comes to catching the jolly old man to ask for more presents...
36 photos

Yes, it's true that we’re again searching for just about any excuse to give up on the frigid temperatures experienced by some parts of the Northern Hemisphere in exchange for a sunny setup.

And, because we’re always looking for new and interesting vehicles to share with you through our Ford Month feature, this time around, we thought about bundling the two and introduce you to this 1966 Mercury Comet.

Now, with the mandatory Santa Claus comment about the Mercury being one of the loved reindeers commanded by one Rudolph the Red-Nosed Reindeer out of the way, let’s focus on the ‘66 Comet Caliente Convertible.

Anyone remembering the life story of this Mercury from the 1960s and ‘70s knows very well the Mercury Comet had a bit of a convoluted story, as it gradually bounced back and forth between the compact and intermediate segments over the course of six generations.

This example from 1966 belongs to the third-generation evolution, which by that time was growing out of its compact (Ford Falcon-derived) form and was landing on a mid-size chassis shared with the Ford Fairlane.

The series was offered as a 2-door hardtop, sedan, and convertible, while the four-door models belonged to the classic sedan and station wagon body styles.

Wonder why the Comet is also called a Caliente in this listing from Cars Remember When? Well, the answer is simple, as the model had interesting trim denominations such as the Capri, Cyclone GT, or Voyager. Still, the grade probably has nothing to do with the rather low pricing of $33,499.

Granted, even though the Comet has just 17,101 miles (27,521 km) on the odometer and the pristine red with white top exterior bodes well with the white deluxe interior, there’s one issue that hinders its general appeal.

For us, in particular, it’s the double-headlight and double-grille setup up front. Even with this excessive design statement, the Comet might turn into an affordable entry into the world of classic cars.

The rest of the styling is clean, both inside and out, and this convertible should be a great cruising companion thanks to its powered roof, brakes, and steering and Y code 390-cu in (6.4-liter) V8 engine that’s mated to a four-speed manual transmission. 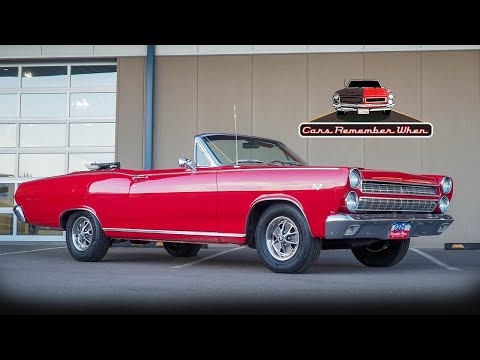