3 2019 Mercedes-Benz GLE-Class Interior: This Is It

4 2019 Mercedes GLE Dashboard Revealed by Spy Video, Has Something New

At first glance, the Range Rover Velar and Mercedes-Benz GLE are two different SUVs. But what if we told you the posh-looking one is better at off-roading?
1 photo
The new Mercedes-Benz GLE looks ready for anything. Its AMG appearance package hints at the performance that isn't necessarily there. Giant air intakes cover the whole front end, even though this particular model is equipped with a 2-liter diesel making just 245 horsepower. It's adequate for meandering around town but makes overtaking quite difficult.

Of course, you can have a six-cylinder too, but then Mercedes will want more money, and the Velar is already pretty good value in comparison.

The dancing air suspension system creates legendary levels of ground clearance. But despite having a €10,000 lifting technology package, the GLE can't elevate itself over a ramp that the Velar deal with.

The Velar is Land Rover's sportier-looking model. Its proportions are sleek, designed to compete with other posh high-riders like the BMW X6. It doesn't look like it's especially good at off-roading or all that practical. However, the official numbers are not to be trusted. In reality, both have about 450 liters of usable trunk space, the rest being under the false floor and basically unusable.

Annoyances? Well, the Polish reviewer Marek needs a dozen kicks to activate the automatic trunk on the British model, while the GLE is already known for one of the worst rear seat folding systems in the class.

We know that appearances are completely subjective, but we've always found the Velar to be one of the best-designed SUVs, and that's particularly evident when the GLE gets parked next to it. Some will undoubtedly enjoy the muscular, almost violent way in which the Mercedes is styled.

Defending the Range Rover's interior is a little more difficult. Yes, the leather is nice, Mercedes simply has more functions on a system which, for now at least, is more reliable and intuitive. 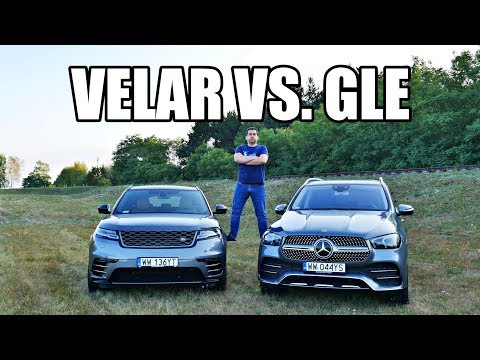