Will There Be Beater Cars in an EV World?

The Velar and X5 couldn’t be more different. While they share the eight-speed automatic supplied by ZF Friedrichshafen, the way one of these premium-oriented SUVs performs in a straight line beggars belief.
11 photos

Pictured in a somewhat boring color, the Velar in the featured clip is the P400 mild-hybrid turbo sixer. The 400 stands for metric horsepower, but over in the United States, make that 395 ponies at 6,500 revolutions per minute. 405 pound-feet (550 Nm) of torque at 2,000 revolutions per minute also need to be mentioned, along with an electric supercharger that works in conjunction with a twin-scroll supercharger for better throttle response.

The force-fed sixer from the Ingenium engine family has the same displacement as the B58 in the X5 xDrive40i. This particular example of the breed isn’t completely stock, however. The only modifications brought are the Touren black-finish wheels and muffler delete, hence the louder exhaust note. It’s also worth mentioning the B58 is a single-turbo affair with 335 horsepower at 5,500 rpm and 330 pound-feet (447 Nm) at 1,500 rpm.

Tipping the scales at 4,863 pounds (2,205 kilograms) compared to 4,435 pounds (2,011 kilograms) for the British challenger, the Bimmer launches and pulls harder than the Range Rover Velar from a dig and from a roll in both automatic and manual shifting modes. The Bavarian automaker is renowned for superior engine-transmission integrations, but we also have to mention that German ponies are different from their British counterparts.

Speaking of shoddy engineering, remember The Fast Lane’s lemon of a Land Rover Defender? Fitted with a four-cylinder turbo rather than the six-cylinder mild hybrid of this Velar, that particular vehicle triggered a check engine light after only 167 miles (just under 269 kilometers). Land Rover’s technicians eventually discovered that the 2.0-liter mill can’t be repaired. 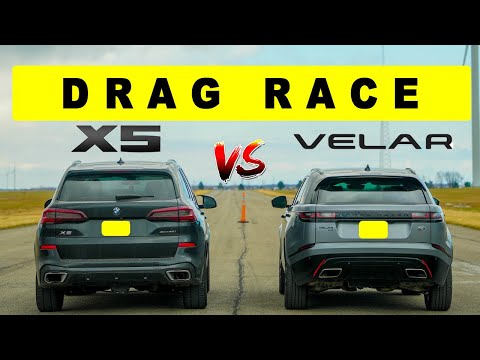