The Land Rover Range Rover Velar, to use its full name, is the latest SUV launched by the British carmaker to slot under the Range Rover Sport model and just above the smallest of the bunch, the Range Rover Evoque.
8 photos

Even though it's closer in size to the Sport, it feels like the Velar has more in common with the Evoque. Its low roofline, tiny driver door opening, and sportier appearance make it look less practical than the two larger models, and more of a self-indulgence car.

It's also the most beautiful out of the entire lineup, and that extends on the inside as well. Given the success Range Rovers have had lately, we expect there will be no shortage of Velars on the road in the years to come. But while luxury and projected status will be the first things on its future clients' minds, it's not a bad idea to know just how safe the Velar is as well.

The guys at EuroNCAP - the only people paid for destroying cars who don't work at a scrap yard - have finally gotten their hands on the Range Rover Velar - well, several of them, actually. As you would expect from a vehicle in this class and after looking at the rest of its family members, the Velar did very well in the crash tests, but there are a few aspects that Land Rover might want to look into.

For instance, protection for the torso of the rear passenger during the full-width frontal crash was deemed marginal after measuring the rib compression readings. Other than that, every part of the body of both driver and passengers was either well or adequately taken care of by the Velar, even in the more demanding lateral impact crashes.

Two more "marginal" safety ratings were attributed to the whiplash protection in case of a rear impact for the adults sitting in the rear seats as well as for the 10-year-old child during the frontal offset test. The overall score for adult protection was 93% (best-in-class is 96% obtained by the Volkswagen Tiguan) while for child occupants was 85%.

The 2018 Range Rover Velar received a surprisingly good score for pedestrian protection, particularly for an SUV, which is probably down to its lower stance and less prominent grille. Another feature that helped it was the standard fitment of the autonomous emergency braking system which manages to avoid or mitigate most collisions. 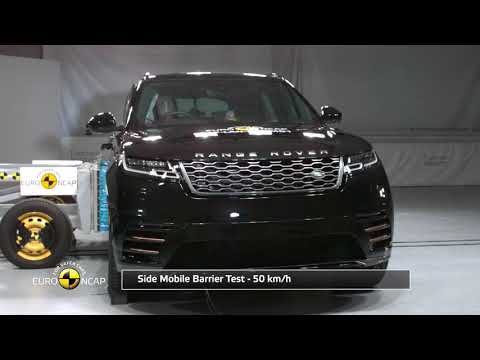