2 Vauxhall To Unveil Its Most Powerful Car at Goodwood, It Is a Limited Edition

4 The Mighty Mephistopheles to Roar at Goodwood

5 Bentley Continental Supersports First Drive with Derek Bell
Up Next

Mihnea Radu
The Range Rover Sport SVR is not the first SUV to lap the Goodwood hill on two wheels but it is by far the biggest one, perhaps also the most powerful. That's like saying 'this is the largest hippo ever to ride a bicycle."
5 photos

Most people buy this 4x4 simply to show off how big their bank accounts are. However, in the hands of professional stunt driver Terry Grant, the RR becomes a natural acrobat.

The high level of concentration can easily be read on Terry's face as he always wrestles with the steering wheel. After all, this is a 550 horsepower and 2,335 kilograms (5,148 pounds), essentially a Golf GTI on each wheel.

Even though the Goodwood crowd has seen all manner of overpowered machines, it is clearly impressed with the stunt, and they also get a surprise when a stuntman climbs out of the passenger side window and stands on the upturned door of in hagwalah style.

And when the SUV finally lands on all four of its wheels, Terry celebrates with a massive burnout the likes of which no Range Rover has done before. This just goes to show that this level of power and sound is addictive, even for a professional.

However, this is not the first time Terry has driven the SVR on two wheels. We found a video of him doing the same at an indoor event that looks like Top Gear live and another of his training. It seems vehicles with a high center of gravity do at least prove their use in 2-wheeled stunts.

Jeremy Hicks, Jaguar Land Rover Marketing Director, said: “This is our major automotive event of the year and that’s why we invest heavily in our presence at Goodwood. Our status as Britain’s number one automotive investor and manufacturer will be clear to see as soon as visitors walk on the stand and see our huge product offensive which sees us in the midst of 50 product actions over five years." 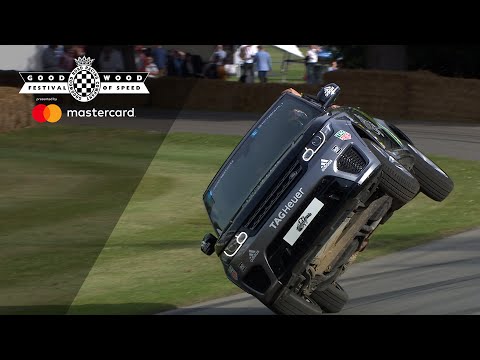