1 A Range Rover Evoque Convertible Meets a Famous Ford, the Driver Gets To Learn a Lesson

3 Manhart Turning the Bentley Bentayga Into the BT800, It's More Powerful Than It Sounds

5 Jeep Grand Cherokee Trackhawk Races Audi SQ7, Watch as Germany Bows Down to America
Up Next

Alexandru Boghiu
There’s probably not an easier, faster, or more fun way of finding out whether “this” or “that” car is better than solving the debate with a drag race. The one we’re watching today involves not two, not three, but four cars. All SUVs weighing between 2.2 and 2.5 tons (4,850 to 5,511 lbs).
11 photos

The Bentley took off like a rocket in the first race, contrary to the Range Rover, which looked like it lost the race from the get-go. Maybe being the heaviest isn’t particularly useful in a drag race because the car’s sluggishness off the line seemed to be a reoccurring theme.

The Bentayga won the first race fair and square, with the AMG being the runner-up. While the Range Rover couldn’t keep up with the pack, the Bentley and the AMG were pretty much neck and neck throughout the second race, only this time around, the AMG took the first place.

As for the decider, the AMG went off determined to take the crown – which it did in 12.4 seconds, leaving the Bentayga in second place with a quarter mile time of 12.6 seconds.

Now, if you’re accustomed to these drag races, you know there’s a rolling start usually following up. But in this case, since we’re dealing with SUVs, there isn’t (at least not yet). You can check out the video below to see what happens next. 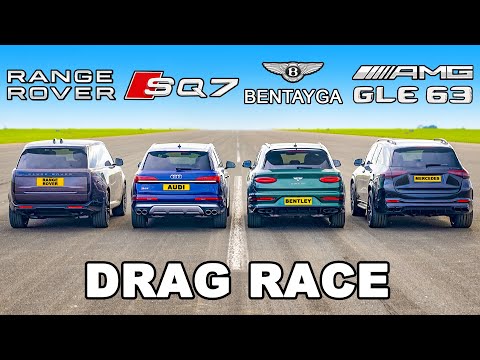