Currently, if an MSRP of $179,500 is of no consequence, one can snatch a 2021 Land Rover Range Rover with the flagship supercharged V8 engine. It’s the traditional version, not a Sport or a Velar. But if you want to go truly classic...
27 photos

Then one should consider spending about the same amount of cash on something that was born in 1969 and got officially retired back in 1996. It rhymes with both Rand Rover and Classic, so let’s just call it an RRC. After all, that’s how the good folks over at E.C.D. Automotive Design like to label it – along with many of the model’s aficionados.

The Kissimmee, Florida-based company has made a big name for itself in the Land Rover Defender restomod field already. But although the rough SUV occupies much of their time, there’s always room for a little more. Such as playing with the RRC – or fully electric versions of either the Defender or the Range Rover Classic.

Dubbed Project Mercer, this traditionally green Range Rover Classic still has an ICE powerplant under the hood. But it’s not of the Land Rover variety. After all, even the supercharged 2021 Range Rover P565 will have to contend with a mere 565 ps / 567 horsepower. Meanwhile, Project Mercer hides an LT4 swap and an eight-speed auto under the green hood.

Thus, here’s a Range Rover Classic dressed up in a bespoke green color with black accents all over the body and matching 20-inch wheels that is capable of a faster sprint than a brand new 2021 model year example. Seriously, with 650 horsepower on tap, the RRC is shown in the video embedded below to be capable of hitting 60 mph / 96 kph in exactly five seconds. Whereas, its modern successor needs 5.3 of them...

So, with that in mind, does it matter the body looks rather old(ish)? After all, the interior creature comforts are on par with the current one, ranging from a floating Alpine touchscreen infotainment system with Apple CarPlay to wireless smartphone charging. And the luxury features are equally in abundance... 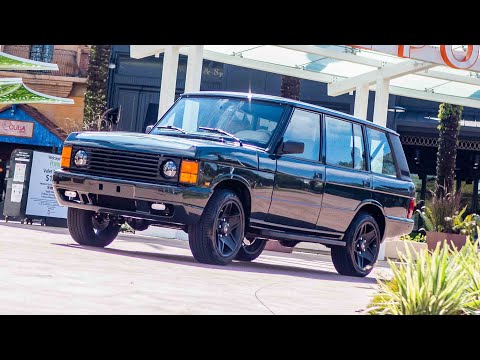