Motor Trend’s go-faster guy has some sensible car advice for you. As the headline implies, your car's rubber shoes influence handling a lot. The question is, how much of a difference do they make on the racetrack?
80 photos

Sponsored by Tire Rack, the following video starts off with Randy next to a C8 Corvette with the Z51 Performance Package at the Willow Springs circuit near Rosamond, California. The mid-engine sports car comes standard with Pilot Sport 4S tires from Michelin, a summer-only tread and compound that measures 245/35 by 19 inches up front and 305/30 by 20 inches out back.

As expected from the successor of the Michelin Pilot Super Sport, the PS4S is also ZR-rated for high-speed capability. With the bone-stock rubber boots, the ‘Vette is much obliged to post a lap time of 1:28.48 without any drama.

Randy is most impressed by how well the car puts the power down coming out of a corner, and that is directly connected to the grip offered by the factory-supplied Michelins and how the sidewalls react under cornering forces. Care to guess how the C8 performs on the track with “a set of tier 3, tier 4 tires” that haven’t been named by Motor Trend for obvious reasons?

The Rocket is much obliged to hit the blacktop once again to answer that question, and obviously enough, inexpensive tires underperform badly. “It’s drifty on the way in,” said Randy on the long turn two, and you can clearly see the car struggling to brake in a straight line in preparation for the third corner. “It’s more like rally driving on dirt” sums up how much of a difference there is between these cheapos and the more expensive Michelins.

If you watch Randy’s hands with utmost attention to detail, you will also notice that he’s fighting the steering wheel more than before. Across the finish line, the C8 couldn’t manage a better time than 1:33.57 because cheap tires are particularly bad at the limit. Instead of a smidge of understeer and a really planted rear end, you get oversteer and an unpredictable rear end. 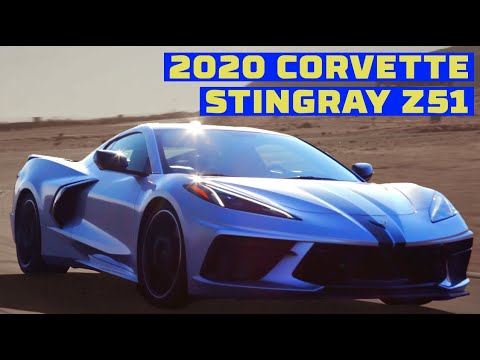