5 Prodrive's Renault Megane RX Is a Rallycross Supercar
Car video reviews:
Up Next

Driving in Rallycross involves a lot of drifting since grip is at a premium and you are rarely doing anything without the wheels spinning more than they're supposed to.
8 photos

In a lot of ways, doing rallycross is more similar to drifting than to any other type of racing on asphalt. Sure, you don't aim to go sideways on a dirt track, but you know you will in almost any turn, so you better learn how to control the car's rear end or you're going to be in a lot of trouble.

If you're drifting on a racetrack, then you're definitely doing something very wrong. The old adage saying the less spectacular a car looks on the track, the quicker the lap time is going to be is true, and that's because composed driving may not sell tickets, but it wins races. And sensible drivers don't drift.

Randy Pobst has been around the racing scene for many years but, as he admits it himself, dirt driving is something completely new to him. Not only that, but he's shown up in a beaten-down BMW 325 (E36) that he describes as "the poor man's drift car". That's because apart from being stripped down, the old Bimmer doesn't actually feature too many modifications: it has a welded rear differential and a set of straight pipes that become apparent the moment Randy revs up the engine for the first time.

We can't think of any better use for a couple of hills than to have a rallycross track carved into them. The beauty of this kind of racing is that, since you're never going to go fast, you don't need powerful or expensive cars to have a go and, if you're good enough, actually stand a chance of competing.

Randy only finished 7th out of 14 but given his car as well as the fact it was his first time, we say "only" just because he's a pro whereas everyone else was probably from amateur league. Anyway, if you've ever considered giving rallycross a go, watch this clip and you'll likely end up as hooked as Randy seems to be. 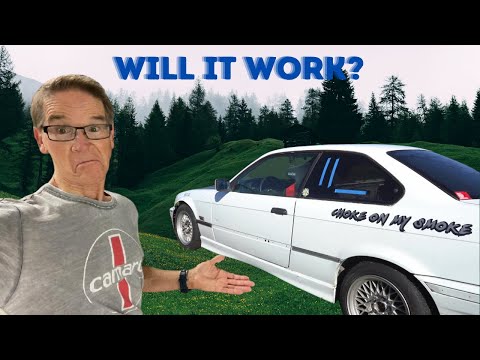