There are lots of wonderous custom-built cars out there, and some were also featured by Shawn Davis and his AutotopiaLA channel on YouTube. But this G-body manages to stand out in any crowd from a standstill.
56 photos

And then, when it “rips,” you see the feeling that it’s destined for a league of its own was not even close to describing it. Seriously, we are dealing here with a monster. Better yet, it’s an entire herd of monsters hidden behind the subtle gray paintjob.

If this was one of those “shorts” features, all that was needed to put the car into the proper perspective was a collage of Shawn Davis’ facial reactions during the drive. No, sorry, we should call it the “rip” because this really doesn’t qualify as a normal ride-along. Luckily, this is yet another fully-fledged feature from his YT channel.

So, because loads of smoke and brutal shifts will speak a thousand words, we’ll try to keep it short instead. We are dealing here with something that was once a 1986 Buick Regal T-Type. But once the motor blew up, the guys over at P2 Fabrication and the owner decided to go for the traditional LS swap. But that wasn’t all because it kind of “snowballed.”

Now, it’s also a supercharged, dry-sump LS build mated to something that’s neither a stick shift nor a traditional automatic. Instead, they went for a sequential gearbox to hold the monster at bay. The one that can deliver up to 1,176 horsepower at maximum setting. Not that it needs that much when on the street.

And so, without further ado, let’s get to the priceless reactions that start from the 3:33 mark and continue through the entire driving part, the NSFW mode engaged for the big pull (at 9:30), or the traditional burnout (seen at 10:28) which feels like it’s about a mile long! 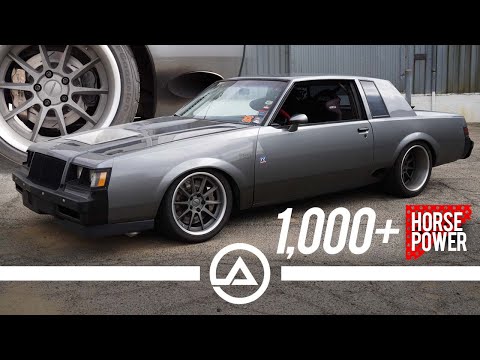