If most people owned a Dodge Viper ACR, the one and only thing they'd do with it would be taking it out on a track and doing their best not to get killed. Not Mike, though.
15 photos

You might know Mike by the name of his YouTube channel, Street Speed 717, though his full real name has been making the headlines a few weeks ago as well. Michael Hyssong has had to pay $53,000 for driving another RAM TRX (with 44" mud boggers installed via a ridiculous number of wheel spacers) through a creek, something that's apparently illegal in Pennsylvania even on private property.

Before installing the huge wheels, however, he used that TRX to jump over the same creek in a video that has, quite understandably, gained him a lot of attention. Some of it, as it turned out, was of the unwanted kind. Following the legal issues, Mike apologized and said he would never drive a vehicle through a body of water bigger than a pool again, but he never said anything about jumping.

In fact, not that long ago he had a ramp built out of dirt he used to jump a Lamborghini Urus over an older Lamborghini Aventador. It's been five months since then and we can probably all agree that, once you've tasted the thrill of jumping a big car over a smaller but quite expensive one, five months is a long time to go without it.

The Dodge Viper ACR purchased in the meantime provided the perfect candidate for the jumpee, while the jumper couldn't be anything other than the ~700 hp RAM 1500 TRX. Well, he does own a Ford F-450 truck which would have made the video even more exciting, but most definitely a lot more expensive as well.

There wasn't too much in it even with the much lighter and quicker TRX, so if the thought had ever crossed his mind (which we doubt), it's a good thing he didn't act on it. Getting the Viper in position provided a challenge in itself. Most people would have used a truck and a trailer, but then again, most people wouldn't jump a full-size truck over the Viper in the first place.

Mike decided to drive the ACR into place which meant going through grass that was at least three feet deep. The Viper took it like a champ, but we couldn't help thinking what a great lawnmower it would make if that massive front splitter had some really sharp blades sticking out.

With the V10 sports car in place, it was time for the TRX to do its trick. We don't tend to care that much about other people's property if they are the ones risking damaging it on purpose, but we definitely didn't want to see the Viper get hurt. It's such a rare and special piece of automotive history - it's basically a classic even if it doesn't really meet the age criteria.

Luckily, it all ended without any piece of metal getting bent or scratched. There wasn't that much in it, but it was enough to keep this stunt from turning into a motorhead's worst nightmare, and that's all that matters. Give the clip a go since there are some pretty cool images to be seen, and we're not just talking about the TRX's tire going one inch above the Viper's windshield and roof. 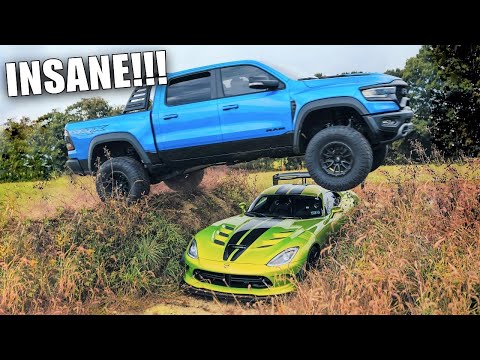