1 Rivian Will Get $1.464 Billion in Incentives From Georgia to Build Its Second Plant

2 Towing a 7,000-lb Trailer With a Rivian R1T More Than Halves the Range, It's Great News

German Tiny House Studios Only Builds One Model for Mobile Living. Nothing More Is Needed

Progress is what defines us as a species. We've learned to master the elements to make our lives better. From discovering fire to inventing the wheel to going out into space, we're constantly trying to improve our technology. But sometimes, technology can be a double-edged sword. Naturally, some people are skeptical of progress in certain industries, and the automotive industry is one of them.
15 photos

Still, to this day, people are debating whether EVs are indeed a step forward for mankind or not. Some argue that it's the only logical way forward, as our environment has already suffered enough due to the incessant release of carbon dioxide into the atmosphere.

But at the same time, there are groups of people who support the idea that EVs are even more harmful to the environment, as well as unsustainable. The production cycle of batteries and the infrastructure of our power grids are years away from being as efficient as they should be.

But then again, looking back at history, any new idea has been met with both support and resistance from humanity. Of course, not all ideas become part of our lives. But it doesn't look like EVs are going to fade away anytime soon. It's not just a fad anymore.

Companies are investing billions of dollars into developing the next generation, non-polluting vehicles, and there are several benefits to this change for sure. With the launch of new electric models each year, we get to see straight-up comparisons between them and older cars that are still running on ICE.

The RAM TRX took the pickup market by storm less than two years ago. Powered by a supercharged, 6.2-liter V8, it offers drivers an unforgettable driving experience, with 702-hp and 650 lb-ft (884 Nm) of torque on tap. One by one, the Ram TRX went up against all the big players, including the Ford Raptor, of course.

And it didn't take long for it to be informally crowned the King of all pickup trucks. But things are moving fast in the automotive industry these days. And the Ram TRX's reign was bound to be short-lived.

Just as Tesla managed to amass an army of fans across the globe, that seems to be the case with Rivian as well. The American manufacturer set out to start an electric revolution, and by God, it looks like they're pulling it off!

The R1T keeps becoming more and more attractive as every day goes by, and it was just a matter of time until someone decided to throw it in the ring against the TRX. The new kid on the block has yet to prove itself in the arena, but it does have the specs to back it up.

And it has become common knowledge at this point that EVs are not to be messed with in terms of acceleration! The cool thing about today's challenge is that it's set to take place in the desert, so both trucks should feel right at home here.

Both are equipped with All-Terrain tires, so there's just one thing left to do: a head-to-head battle to the quarter-mile (402 meters). It seems that in the initial testing, both trucks managed to get similar 0 to 60 mph (96 kph) results, but deep down, we all know that someone is about to eat a lot of dust.

The first run will have both the TRX and the R1T performing a standing start. By the time the supercharged truck shifts into second gear, the quiet one is already starting to increase its lead. And there's no coming back.

But let's see what happens if you try to even the odds by switching to a rolling start format. TRX fans will be severely disappointed by the results, and you could say that the ICE age is coming to an end. Now, we just need to get ahold of the Rivian R1T so we can test it for ourselves. 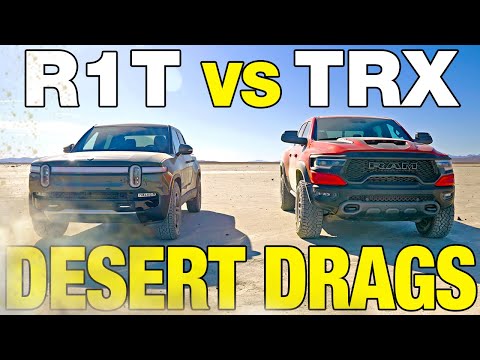