4 After Decades of Service, It's Time for Australia's Aging Classic Hornets to Retire

Air-to-Air refueling (AAR) is vital for military aircraft to be able to operate longer in any type of combat scenario, therefore it’s also an important component of realistic military training. This is why a Royal Air Force (RAF) Voyager tanker couldn’t miss one of NATO’s most demanding flight training programs.
6 photos

The Tactical Leadership Program, one of the few flight training courses with multi-national participants, unfolded over three weeks at the Los Llanos Air Base in Spain. Only individually-selected pilots from various NATO armed forces participated. More than ten scenarios are played out throughout this program, which requires months of planning.

Wing Commander Millington explains that the program’s scenarios are meant to be as realistic as possible and as varied as possible, including defended airfields attack operations, plus search and rescue missions. Adding to the realism of these combat scenarios is the AAR component because refueling is something that occurs in most operations, so this is good practice.

A RAF Voyager operating from the Torrejon Air Base near Madrid, with a crew from the 10 Squadron and 101 Squadron of RAF Brize Norton, participated in the NATO program. It fueled fighter jets from seven different countries, including F-35B Lightings from the U.S. Marine Corps and Eurofighters from the German Air Force. According to program officials, although standard refueling procedures are specified in NATO documents, regular practice for refueling skills is still a must.

The Voyager is RAF’s only AAR tanker, and it can operate a towline, where it orbits around a designated area, waiting for receivers, or in a trail, where it flies together with fast jets, refueling them over long ranges. This 192-foot (58.8 meters) aircraft can typically deliver up to 132,000 lbs (60,000 kg) of fuel at 500 nautical miles (575 miles/930 km) from the base. In addition to its refueling capabilities, it can also safely carry up to 291 personnel or deliver essential cargo.

The RAF Voyager fleet provides AAR at home and overseas while also participating in different types of operations, such as the recent one for evacuating civilians from Afghanistan. 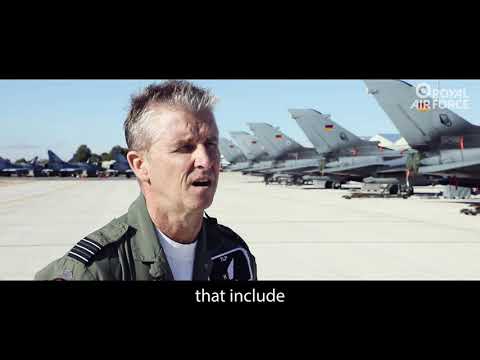