RAF’s Atlas Shows How Far It Can Reach, During Successful Resupply Mission

No long-term military operation could be a success without the timely and efficient replenishment of supplies. In addition to refueling capabilities that are also essential, aircraft such as the Royal Air Force (RAF)’s Atlas (A400M) are able to deliver crucial supplies to the troops over long distances. Atlas showed what it can do during a recent operation in support of a UK Army training exercise in Estonia.
6 photos

Atlas reached another milestone as it successfully delivered supplies at a significant distance from the UK, safely returning to base afterward. The 147-foot-long (45 meters) aircraft flew more than 1,000 miles (1,609 km) from RAF Brize Norton in the UK to the Nurmsi drop zone in Estonia. Overall, it completed a nine-hour round trip, successfully dropping six bundles of supplies for the UK troops that were participating in the exercise Dirt Track.

The aircraft had members from several Squadrons onboard, including the 30 Squadron, which is the first in the world to be dedicated to aerial delivery. The mission was not only a confirmation of the aircraft’s long-range and increased payload capabilities but was also used as essential training for newly-qualified crew members who will be tasked with resupply operations in the future.

Atlas can deliver over 40 tons of payload, crossing distances of more than 2,000 nautical miles (2,300 miles/3,700 km) and fly as high as 40,000 feet (12,192 meters). It’s designed to reach remote military airfields, even with unprepared strips. Boasting a flexible configuration, it can carry vehicles and helicopters, including a Chinook, or mixed loads, such as nine pallets and 54 passengers. It can transport various combinations of vehicles, pallets, and personnel, delivering the load via landing, via parachute, or via gravity extraction from its rear ramp.

Towards the end of last year, RAF’s Atlas also demonstrated its air-to-air refueling capabilities for the first time. This recent resupply mission in Estonia adds another accomplishment under its belt. 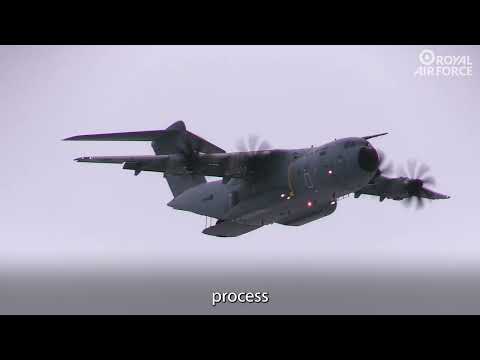