2 Deadmau5 Ordered a McLaren P1, Got a Scale Model Instead [Updated]

3 Deadmau5 Bought a New McLaren P1: on to The Next One

4 Deadmau5 Actually Has Love for Porsche Too, Owns a 911 Carrera S Cabrio

Ionut Ungureanu
Canadian IndyCar star James Hinchcliffe took his fellow Deadmau5 at the Indianapolis Motor Speedway for a proper motor spin the other day. Zimmerman, who is quite the speed enthusiast, got a swift introduction to the racer’s Honda ride, as he took the tight turns on the track’s road course. Needless to say the Canadian DJ had a great time, as he got a taste of what racers experience on the track’s road course.
1 photo
"He's hitting these brake points at the last possible millisecond, and he's hitting them hard," the Canadian DJ said after exiting the car.

The music producer met up the IndyCar racer on Wednesday and the two had quite the joy ride as they would take a spin round of the course’s 2.5-mile oval. Deadmau5 was enjoying the ride as a passenger in a two-seat Indy Racing Experience car driven by Hinchcliffe.

The weather conditions were not quite the best for an amateur racer, but rain tires were dealing just perfect on the 14-turn course used during this year’s inaugural Grand Prix of Indianapolis. In fact, reports are this was not Zimmerman’s first time.

Conor Daly, who drove in the 2013 Indy 500 and who is also a fan, encouraged Deadmau5 to attend this summer’s Hondy Indy Toronto double-header event in July. That’s where the musician took his first two-seat ride, and the Verizon IndyCar Series even gifted him the helmet he wore on Wednesday. It’s a black matte model accented by glossy “Deadmau5” logos.

As to Hinchcliffe, the racer just announced he will join Schmidt Peterson Motorsports for the 2015 season and drive the #77 car. 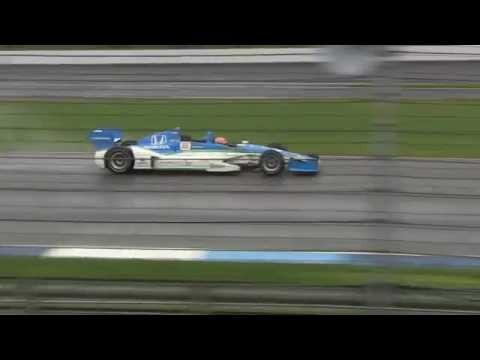