Fast and Furious movies have had more expensive, exotic, and powerful cars, but we keep coming back to this one, Brian O'Conner's Nissan Skyline GT-R. The movie itself isn't a classic by any measure, but it speaks volumes about people's passion for cars, especially in the late 90s and early 2000s.
15 photos

Believe it or not, the Japanese import scene wasn't as widespread or famous back then. The producers of what became a franchise saw something special in the way Supras and Silvias were being customized and wanted to bring it to the big screen. 2 Fast 2 Furious, the second movie, is perhaps the best portrayal of the tuning scene at the time, highlighting the crazy paint jobs and underbody lights.

After letting the "bad guys" go in the first movie, Brian O'Conner goes from cop to rebel, learning to live his life one quarter-mile at a time. At the beginning of the movie, he uses the famous Skyline to participate in a street race hosted by Tej Parker. After making a dramatic bridge jump, the protagonist wins the race but gets taken down by an ESD harpoon. The GT-R gets impounded, which is where we find it today.

FF movies don't tell us what happened to the car after, but we figure it would be very valuable in the real world. Not only is this an R34, which is like a pot of gold, but the story of its previous owner would also be pretty cool. This is why the Skyline deserves rescuing from the impound yard, its silver paint restored.

And that's what model car renovator Good Restore tried to do here. Yeah, we know it's not the real deal, but we can think of nothing better to watch on a lazy Sunday afternoon than somebody painting scale R34 in silver with blue stripes. It's also got some amazing interior details, which are classier than the car in the 2003 blockbuster. 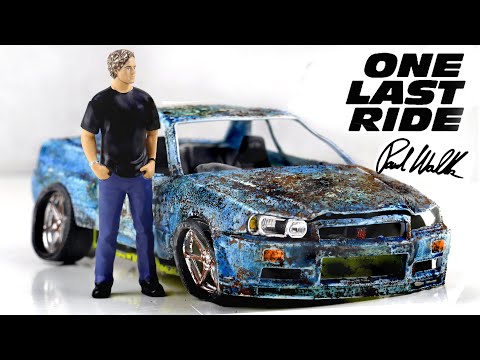