5 DJI FPV Combo Cinematic Drone Will Take You on the Flight of Your Life
Car video reviews:
Up Next

Peloton CommuCycle Could Make Your Drive to Work a Fitness Routine

Everyone loves a good drone. One that’s fun and brings joy to the neighborhood. But some drones are meant for a whole lot more than just that. Today they’ve become an invaluable member of teams the world over.

One of these workhorse drones is the R2-150 UAV from FLY-R. If you have no idea who this team may be, not a problem, it’s one of the reasons autoevolution is here. It all started in 2013 when three engineers decided to design, develop, and finally manufacture UAVs for both civilian and defense applications. Operating out of Reunion Island, France, this crew creates fixed-wing aircraft from 1.5 meters (4.9 feet) to 6 meters (19.7 feet) in wingspan.

However, what sets this team’s drones apart from others is the wing. Just to make things clear, the engineers that run FLY-R have over 45 years of combined experience when it comes to design and development. With that experience, this team has developed a completely new wing style for UAVs known as a rhomboidal wing. If you want to see the test flight, check out the video below.

The 150 is one of the first drones developed by this team and it also comes in with the smallest wingspan, that of 1.50 meters (4.9 feet), and yes, it too, comes in with a rhomboidal wing. This UAV is meant to offer surveillance and reconnaissance to whoever is using it.

The beauty behind it is that it’s a fully automated UAV. How is this achieved? Simple, a whole bunch of technology that won’t fit into one article. However, all flight patterns are preprogrammed and require absolutely no operator assistance. The only time an operator is to be required is in the eventuality that a flight pattern modification needs to be made.

Overall, the 150 can cruise at speeds of 115kph (71 mph) and can do so for up to two hours. For the applications for which the drone has been created, it seems to be more than perfect. In case the task at hand requires a bit more speed and ability, the 150 tops out with a speed of 200 kph (124 mph).

One neat thing about this UAV is its ability to reach a ceiling of 5,000 meters (16,404 feet) above sea level. For on ship applications, this allows you to spot pirates or any other impeding dangers, offering precious preparation time. As far as operating range, only a 50-kilometer (31.1-mile) radius is possible.

Another feature of the 150 series UAVs is its takeoff and landing sequence. To take off, the drone is placed on a launcher that utilizes absolutely no pyrotechnic materials. Through an ingenious system of vacuums, pistons, and pulleys, the 150 is launched at speeds up to 80 kph (49.7 mph), from there the motor takes over. To get a better understanding of the launching system, please check the gallery as it’s a bit difficult to explain in words.

Equally impressive is the landing sequence. Since no landing gear is built into the UAV, it’s required to land on its belly, or by using a sort of catching net composed of chains setup between two posts, much like a volleyball net. The benefit of using launching and landing sequences like this offer the drone an ability to be deployed anywhere. There's no need for a runway to takeoff, and again, no runway to land.

Personally, I think these are the sort of applications for which we should be using UAVs, not for launching missiles at each other. Yes, I'm all for that world peace, even though it’s only an idealistic dream. 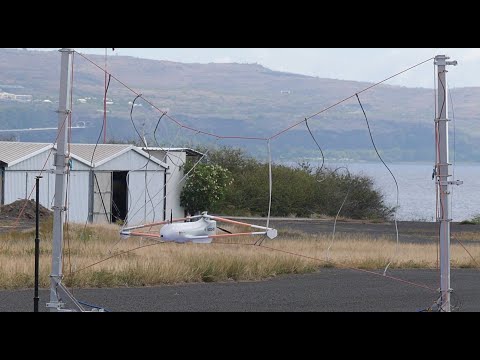