1 1968 Mustang Bullitt Story: From Movie Prop to the Most Expensive Mustang Ever Sold

2 DeLorean Built a Supercar That Americans Didn't Want, and Now It Is Lost but Not Forgotten

4 Knaus Tabbert’s Carvisio: The Beautiful, Tech-Packed RV of the Future That Never Was

5 Suite N°4 Is How You Turn the Iconic Renault 4 Into a Rolling Hotel Room
Car video reviews:
Coverstory

The bigger the better, as the saying goes. For trailers, campers, RVs and other types of mobile homes, this has always been true, and with good reason: the bigger the footprint, the more amenities could fit in, making life on the road more comfortable.

QTvan Is World’s Smallest Trailer Towable by Bicycle, Still Has TV and Minibar

But does that mean that a very small footprint is incompatible with comfort? Not so, if you look at the QTvan, officially the world’s smallest, but still road legal, trailer, towable either by mobility scooter or bicycle. The QTvan, with its ingenious layout and the fact that it was an actual product, deserves a spot in autoevolution’s Iconic Vehicles Month coverage.

The year was 2011, and the entire population of the United Kingdom, Brits overseas, and other Royal Family-obsessed folks from all over the world were preparing for what ultimately became the wedding of the year: the nuptials of Prince William and Kate Middleton, known today as the Duke and Duchess of Cambridge. In the pre-2020 international health crisis, thousands gathered in London with several days in advance, camping wherever they could or sleeping under the stars, for a chance to see the newlyweds.

As old jokes and basic geography knowledge will tell you, sunny and warm weather is not exactly the standard in the UK. So, to prepare commoners for the big moment, UK-based Environmental Transport Association (ETA) had a wonderful idea: a trailer that you could tow by mobility scooter or, with mild adjustments, even by a motor-assisted bicycle.

The trailer, called the QTvan, would cost £5,500, which is over $7,500 at the current exchange rate, but that was ok, since it was never really made available for purchase. It was more of a joke or, better said, a showcase model meant to prove that you could pack all the creature comforts you’d need for an extended ride in the smallest footprint.

ETA said the idea for this ridiculously looking but very useful trailer was, number one, to provide shelter for those coming out to London for the Royal wedding and, number two, to provide shelter for mobility scooter users in case their battery died on them unexpectedly, as they waited for backup or a ride home. In other words, its application extended beyond the Royal wedding – who wouldn’t want to go out glamping in this?

The name was a double-entendre. You pronounced it “cutie van,” which was accurate, but it also stood for three of the Brits’ favorite pastimes: queuing, tea and caravaning. Because of the size, you could take the QTvan up on sidewalks (and also onto cycle paths), and into actual stores that allowed mobility scooters.

Power came from a 240v hookup or battery, with an estimated range of 30 miles (48 km) on a single charge. Maximum speed was of just 5 mph (8 kph), so however long you stayed on the road, it was bound to feel a whole lot longer. For instance, ETA advised a maximum distance of 10 miles (16 km) per day, and that alone should tell you all you need to know about what it must be like to hit the road with the QTvan.

But when you retired inside, you got a 19-inch wall-mounted TV, a kettle to boil tea, a minibar to unwind after a long day, a one-person full-size bed, bookshelves, and an alarm clock. Jokingly, ETA said the QTvan could be optioned with extras like solar panels, a satellite dish, air horn and extra-wide wing mirror for the mobility scooter, central heating, gaming console, external luggage rack, and bespoke paint. A proper home!

Four years later, the Guinness Book of World Records recognized the tiny trailer as the tiniest in the world. Also then, it was disclosed that the build was the creation of Yannick Read, who also holds the Guinness record for the world’s loudest bicycle horn. That’s him in the second video at the bottom of the page, showing off the QTvan and its many comforts, as it perilously shakes to all sides and seems about to topple while being towed on a grassy field. Read had used it as his own mini-RV, which confirmed that everything about it was functional.

So here it is, the cutie QTvan. 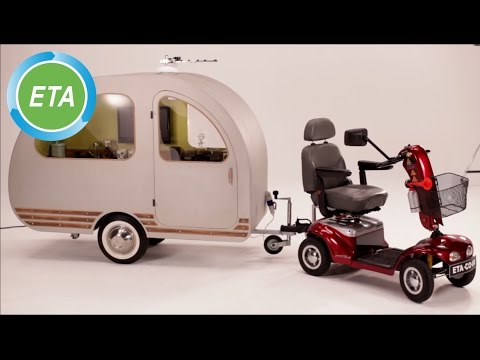 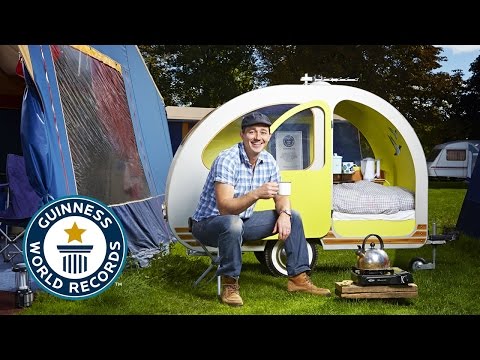 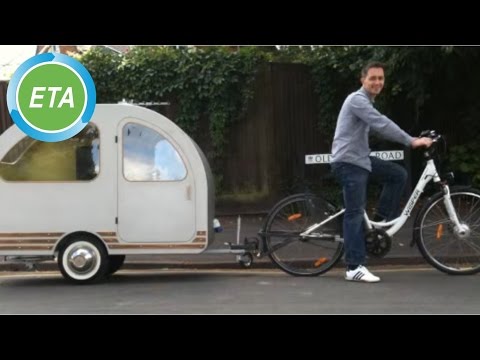