5 Rainbow Bentley Bacalar Is Not Something You See Everyday
Car video reviews:
Coverstory

Puzzled by the Bentley Rotating Display? Here Is How It Works

Owners of the Bentley Flying Spur or the Continental GT are pretty familiar with the carmaker’s Rotating Display and how it works. For the rest of us, that’s the screen in the center of the dashboard that flips over to reveal something different, depending on the needs of the driver. But how does it work, and how complex is the technology? These are the questions the Brits answered this week.
5 photos

The hardware made its debut as an industry first not long ago, at the end of a development process that took around three years. It is in fact a three-sided display, showing the following: a set of three analog gauges (air temperature thermometer, compass and chronometer), a book-matched piece of veneer, or a 12.3-inches infotainment screen.

Each side flips to reveal the other depending on the driver’s will, thanks to a total of 40 moving parts, including two motors, rotational and linear gearboxes, an ECU, and many more.

As you can see in the video attached below, there are three separate motions that make the display rotate. The first pulls the display back into the dashboard to allow for the second one, which is the rotation, to take place. Then comes the third movement, which is pushing the new side of the display into position.

All the changes in position from the display take place according to Bentley within a tolerance of +/-0.3mm, an achievement so great that the Brits even filed a patent claim for the build.

“Not only will this feature be a talking piece in the future, but the veneer fascias will also appear timeless when customers and collectors proudly display their vehicle at Pebble Beach or Villa d’Este 50 years from now,” said in a statement Bentley’s Interior Technical Manager, Dave Rook, also the main man behind the development of the technology. 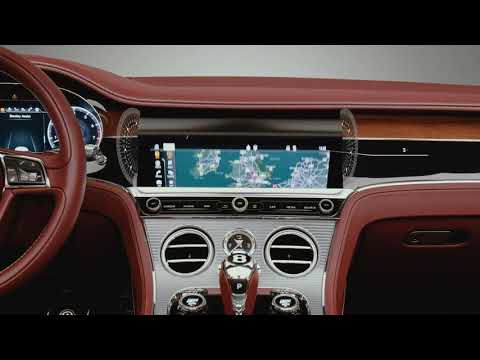