2 BMW Wants to Use Lampposts to Charge Its Cars

5 BMW to Replace Daimler with a Stake in Tesla
Car video reviews:
Coverstory

In what I consider to be the most interesting video seen on Youtube lately, the guys from Auto Express decided to test whether the BMW i3 rises to the expectations people have from cars wearing the blue and white roundel on the bonnet. Be that surrounded by a blue outline or not.
1 photo
They though that the i3 is still a BMW and that automatically has to mean that you can still have fun in it as the company’s motto is ‘The Ultimate Driving Machine’. Completely reasonable, right?

Well, yes, up to a point. The thing is, the Germans made this car specifically for inner city usage. After researching the habits of thousands of Electronauts (people that tested electric cars made by BMW before the i3 was done) they even figured out how much range the customers would need and created the i3 with those numbers in mind.

It was also built to be as efficient as possible and therefore has an unusual high center of gravity and extremely skinny tires. The problem is, BMW marketed this car just like they did with any other and claimed that it’s still fun to drive.

That might be the case but how does it stack up against a more conventional model? To find out, it was pitted against a Suzuki Swift Sport on the Auto Express test track. Unfortunately, they chose the range extended model that has less performance and more weight to carry around than the pure EV model. If that wasn’t the case, we reckon the results would’ve been much closer but even so, the i3 did honorably. Check it out! 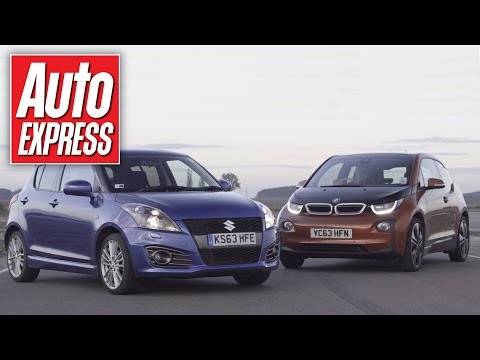