3 The Buster Tiny House Brings Comfort to the Woodland: The Perfect, Stress-Free Retreat

4 This Thor Palazzo Motorhome Is Perfect for Large Families, Can Sleep Seven People

Never let anyone tell you that your dreams are wrong, too expensive or not good enough. Joe Axline never did, and he is now the owner of the most spectacular airplane home in the United States.

Project Freedom: The Airplane Home With Deck, Garage, and a Second Plane for Entertaining

Joe Axline’s home in the aviation community outside of Brookshire, Texas, is more than just an airplane home: it’s a legit airplane compound, made up of two recycled fuselages and offering more amenities than you’d ever find in a regular home (*not including the complete, original and perfectly refurbished 1979 cockpit).

Axline, who also goes by Captain Joe, calls it Project Freedom, because that’s what it’s brought him. The idea goes back to 2011 when, on April Fool’s, his wife informed him that she wanted a divorce. Axline had always loved airplanes and, growing up with an aircraft mechanic and pilot for a father, had dreamed of living in an airplane, like Bill Bixby did in The Magician. As per his own admission, he chose instead to do the responsible thing: get a job, get married, have kids, work 9-to-5 in software to make money to provide for all.

With the divorce, he was free to pursue his childhood dream. Project Freedom is the materialization of that dream and, as of the time of press, it’s still a work in progress, even though Axline started working on it right away. It comprises two airplanes, a McDonnell Douglas MD-80 that serves as his permanent home, and a Spirit Airlines DC-9-41, still in livery, that doubles as entertainment center. The former was sourced from Alaska, while the latter came from a theme park in Florida, and boasts that impeccably refurbished cockpit mentioned above.

Axline moved into Freedom in 2012, as soon as he got it hooked to the mains and had running water. Back then, it didn’t have insulation and was still very much a plane, unsurprisingly. In a 2018 interview, Axline said that sleeping inside the plane while he worked on it was a nightmare because of temperatures dropping in the night, to the point where he was surprised he didn’t freeze to death.

Even though he’s been working on them for such a long time, Axline says shipping the planes to his newly-acquired piece of land was the most challenging, because of the costs incurred. He initially wanted something bigger and he found a Boeing 747 selling for $150,000, but he had to give it up when he learned shipping costs would be as high as $500,000. The total cost of the entire Project Freedom is half that, at $250,000, including the land, the planes, shipping, and renovations.

The 60-foot (18.20meter) MD-80 serves as Axline’s homebase, and it has everything you could need from an actual home: three bedrooms (one for himself with a queen-size bed, and two for his teenage kids), a full bathroom, a kitchen, a lounge, and a small office space. There’s also a wine room under the cockpit, a library, a game room for the kids, and the cutest suspended deck at the rear, with oversize chess pieces and a garage underneath.

To get it to home-like levels of comfort, Axline stripped the ceiling and the insulation underneath, and added foam. He put up two walls to create the bedrooms, put in new floors, replaced the electrical wiring, and hooked the place up to a water well and sewer system. Bits of the ceiling were then repurposed in the kitchen countertops; Axline also kept as much of the original parts as possible: the windows and the shutters, the luggage compartments above, the original sink in the bathroom, lights, air vents, and even the oxygen masks.

Axline has been living inside Freedom for ten years and he’s now in the process of replacing some of the stuff he originally put in, due to wear and tear. The other plane, 50-foot (15.2-meter) Spirit, remains a work in progress: he wants to convert it into an entertainment center. When the project is complete, Spirit will have, in addition to the cockpit, a movie theater, a music room, an arts and crafts area, and a restroom and kitchen. He dreams of giving it its wings back.

Axline has bigger plans for the compound, too. He wants to build a hangar around Freedom, so that it looks as if it’s just getting ready to head on to the runway. He will add model trains and cars around it, so that, when you look out the window, you will get the impression that you’re flying above traffic. He will build a secondary building that will mimic a control tower, and a discrete bridge to connect the two aircraft.

“This project keeps me busy every day, whether it’s putting in new functionality, or making something look better, or visiting with people that come by,” he said a while back. “That’s what it's all about, it’s living life the way you want to.” And not listening to well-meaning voices telling you should give up your dream because it’s silly to want to live in an airplane. 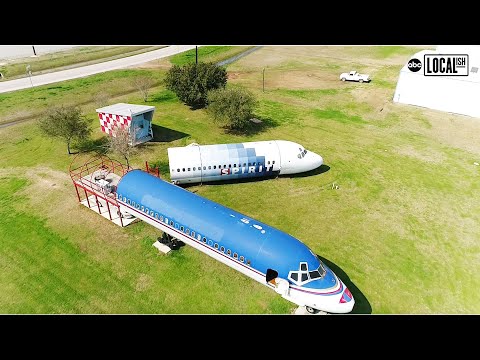