5 Feel the Thrill of Pikes Peak Inside Unplugged Performance's Model 3
Car video reviews:
Up Next

When was the last time you were scared by your own car? The answer is probably "never", and that's because we all tend to choose our vehicles based on our needs and our driving skills.
7 photos

A few Mustang owners who like to attend meets would like to disagree with what we've just said but as a general rule of thumb, that tends to be true. However, give your car to a professional racing driver, and you too might be surprised to see what that vehicle that takes your kids to school can do in the right hands and in the right circumstances.

It's no secret anymore that the Tesla Model 3 Performance is quite capable around a racing circuit. After missing out with the Model S which turned out to be too heavy and too inclined to battery overheating, Tesla decided to make the smaller electric sedan a lot more track friendly. If anything, the fact it offers a Track Pack for the model should be a clear giveaway.

If only things were that simple.

The man doing the driving in this clip is called Misha Charoudin and he's one of the people who eat and sleep on the famous Nordschleife track. A few weeks ago, he got the chance to drive a Tesla Model 3 Performance with the Track Pack installed 'round the Nürburgring, and while he was thoroughly impressed with the way the car accelerated and handled itself, he concluded that its brakes were the worst he had ever experienced. Also, he wasn't too impressed with the 3's suspension either.

It's no surprise, then, that these are precisely the areas on which aftermarket companies such as Unplugged Performance focus when developing their packages. Add in some extra downforce through aerodynamic tweaks, and you've got yourself a racer. You don't need to look any further than the team's experience (you could call it that) at this year's Pikes Peak International Hill Climb to get a glimpse of what the car is capable of.

The red Model 3 you see in this clip hasn't gone through Unplugged Performance's program. Instead, it's been revised by a company called Mountain Pass Performance that, surprise-surprise, messed with the vehicle's brakes and suspension system. It also received a set of lightweight 19-inch wheels to go with the 275/35 Michelin Pilot Sport Cup 2 tires.

Funnily enough, it was the Model 3's owner, a fellow named Max Kosenko, who offered Misha the chance to try the modified EV on track. Why is it funny? Well, you'll just have to watch the first few moments of their time on the circuit to figure it out (sound must be on). We'll just share this quote from Max to pique your interest: "I hope you also don't want to die."

After his first experience on the 'Ring with a Model 3, Misha says he started window-shopping for one. It's safe to assume this second one didn't do anything to change his mind, though he does identify one key aspect that still needs some work: battery cooling. Push the Model 3 too hard, and the system will begin to limit the power in an effort to prevent overheating. Apart from that, you get the feeling he's ready to jump on board the EV train. 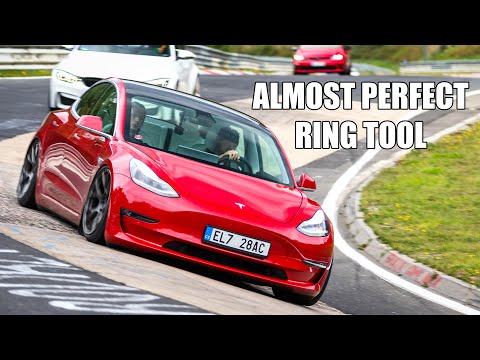