1 Is It Time To Reconsider the MKIII Toyota Supra?

3 2020 Toyota Supra With Built 2JZ Guns for Four Digits on the Dyno, Has Old BMW Parts

If there is a thing that almost every one of us has read online or heard someone say in the last decade, that thing would be someone's desire to have an Mk IV Toyota Supra that is factory fresh. The last new Supra A80 was made in 2002, so it is understandable why someone would claim to want one.
11 photos

The sad part is that many people worship this model without ever driving one and, in many cases, without even riding in one. While part of the fascination for this model came from the Fast and the Furious movie franchise, the latter comes from the vehicle's popularity among tuning enthusiasts.

The A80 Supra is also appreciated by JDM enthusiasts, and its popularity has reached its current level also due to its presence in a couple of video games. The same can be said for the R34 Nissan GT-R, but it also applies to less spectacular models, such as the Toyota Corolla AE86, just to name a few.

Now, with all that put together, how does a 1994 Toyota Supra with a 2JZ-GTE, which is the twin-turbo model, behave in 2022? Well, thanks to a kind owner who let the folks over at Auto Top NL, you can all see how a “factory new” MkIV Supra accelerates on the open road.

Back in 1994, if you had an automobile with 325 horsepower (330 PS), it would have been rather powerful in its day, and 440 Nm (324 lb-ft) is enough twist even if we think of the horsepower wars of yesteryear. Mind you, many people do not have that much horsepower in their newly acquired cars in 2022, and they drive them just fine. There is a difference between "just fine" and "fantastic," though, and it does not matter for everyone in the world.

There is one caveat, though, which is the fact that this example of the Mk IV Supra comes with an automatic transmission. On the other hand, it is stock, and it delivers the same experience as it would have had almost 28 years ago, but in 2022.

Prices for the Mk4 Supra are on their way up anyway, so many would consider this an investment, even with an automatic. Here is how one behaves on the open road and on the highway.

Let us know in the comments section if you feel it lives up to the hype in stock form or if tuning it to more than twice its stock output is the best way to enjoy this vehicle. 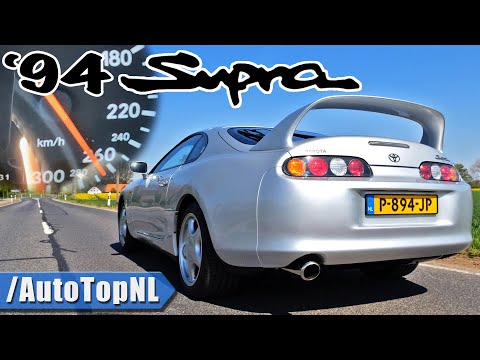