2 Porsche Lets YouTuber Explore the Museum Archives, Let's Dive in With Him

Pristine 1982 Porsche 930 Is the Widow Maker You Want Feared

America’s gray import market has just washed away some of its many sins with this beautiful RoW (rest of the world) Porsche Turbo of the 930 variety. It clearly earned its well-known nickname, but we suspect this beautifully preserved red example did not have the chance to play any pranks on its previous owners. So, think twice before reaching out to buy this 1982 unit and consider yourself forewarned. With that out of the way, better hurry because anyone seeing it will be instantly hooked.
88 photos

People refer to it colloquially as the 911 Turbo. Car aficionados know the difference, though. Porsche built and marketed the 930 model between 1975 and 1989 as the absolute pinnacle of 911 technology, complete with a turbo soul that could easily devour both Autobahn tarmac and lesser-skilled drivers.

American fans officially got the Porsche 930 during the 1970s alone, as the model was withdrawn from the market back in 1980 because of its high costs and low deliveries. Or so says the official story. The reality is that Porsche 930s continued to arrive in the U.S. afterward, although mostly in European configuration through direct imports, part of the flourishing gray market.

This is most likely what happened with this 1982 Guards Red on tan-leather interior example that was probably modified privately to meet federal U.S. emissions and safety standards – Porsche reintroduced the model in America in 1986, but by then it had already decided to change its name into the well-known 911 Turbo moniker.

Because it did not come via the usual Porsche dealer sales channel, the one big question mark for this $112,900 German sports car sold through Garage Kept Motors has to do with the available documentation – or rather the lack of. If you are able to get past this minor hiccup, there’s ample reason to rejoice.

The car comes with just 16,150 on the clock and looks impeccable. There are a few changes that need to be accounted for – starting with the front end which incorporates bigger lights, the larger aero vents for the oil cooler (probably inspired by the Porsche 935 racer) and wrapping up with the wider alloys and racing-like external mirrors.

Its 3.3-liter flat-six engine that was originally capable of 260 hp has been treated with utmost respect, in the form of performance enhancements that include a B&B exhaust setup, a larger-than-life intercooler and an upgraded AC unit.

And the interior is more than inviting, too, with its lovely light-colored leather and contrasting black pieces... tasty, there’s no denying. 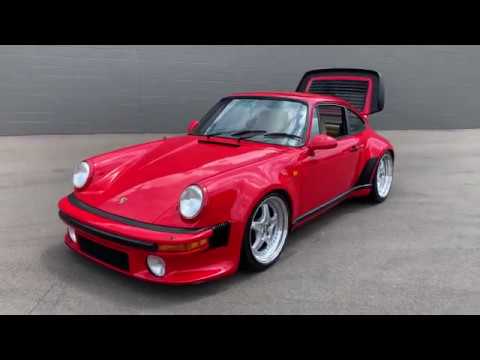