1 USAF Test Flies Alien Critter-Like eVTOL, Here It Is With No Pilot Inside

2 Dragonfly-Like Alia Is the Electric Aircraft Gearing up to Make History in the U.S.

The “democratization of flight” can be seen in many ways, and a Swedish aviation startup has based its entire strategy on this concept. The futuristic Jetson One eVTOL (electric vertical take-off and landing) conquered people’s hearts all over the world with its daring design and technology. In just a couple of months, it will be officially revealed to the public.
7 photos

Top Marques Monaco is one of the most impressive and exclusive supercar shows in the world. This year, in addition to the fabulous supercars, superyachts, and ultra-expensive watches, guests will also be able to take a closer look at a more unusual luxury toy. H.S.H Prince Albert II of Monaco himself will unveil the Jetson One private electric aircraft. This will be a premiere for the innovative aircraft that was introduced less than a year ago, in October 2021.

The aircraft’s huge popularity was also reflected in the fact that it was sold out almost as soon as it became available for pre-order, with customers all over the world eager to try out this electric one-seater. Perhaps not that long ago, the idea of a personal “jet” that didn’t require owning a pilot license and that could be delivered anywhere in the world pre-assembled seemed impossible.

But the ambitious eVTOL builder based in Sweden proved that this could pave the way for future personal aircraft that are accessible, affordable, and emissions-free. Combining a racing-inspired cabin with state-of-the-art avionics and safety features, Jetson One took advantage of how far aviation technology has come. Its eight motors, capable of taking it up to 63 mph (102 kph), were put to the test in several flight demonstrations.

The most recent one, which you can watch in the video below, shows the Jetson One flying over the spectacular hills of Tuscany, Italy. The ability to pilot your own electric air vehicle gives sightseeing a whole new meaning.

Jetson’s personal electric aircraft will make its first public appearance on June 8, 2022, at Top Marques Monaco. Later on, it will also be displayed at the Viva Technology event in Paris, starting June 15. 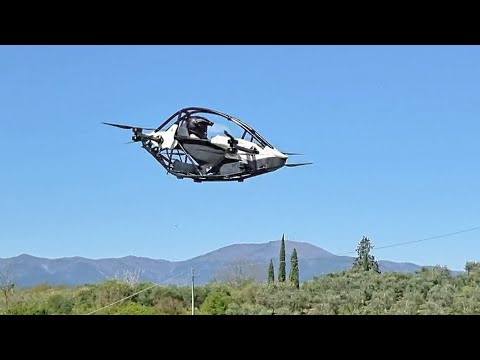