2 Check Out the Crimea (Krym) Roadster Made by Russian Students

5 Lamborghini Murcielago Does the Crash-Dance in Wet Russian Traffic
Car video reviews:
Up Next

Roush Will Build An Engine For A Rocket, It's Not A V8

Parking is an issue for most crowded cities, but it's worse in some places than it is in others. For instance, a couple of hundred years ago, the old European cities weren't planned for the number of vehicles they now have to accommodate, so the local authorities had to take some measures.
5 photos

In some places, these interventions worked, because citizens have enough respect (or fear) for the law, and so they had to abide. In Russia's capital, Moscow, the situation is very much different. You can imagine the respect people have for one another when somebody as angelical-looking as this blonde lady sees no problem in parking her car on the sidewalk.

The boys and girls from the "Stop a douchebag" movement happened to be in the vicinity, and so they captured this dialogue that one of the members of the group - a bearded guy called Islam - had with her. It's worth noting that, for a change, everybody remains calm, and not one curse word is muttered, which gives us the opportunity to listen to a very well-argued plea. Plea for what, you ask? For common sense.

After the blonde woman pedantically suggested they find a better way to help the city, like telling the city hall to make more parking spaces available, Islam has this to say: "It is physically impossible. Physically, the city can't fit this many cars. It's not city's problem. It's the problem of the people who think that if they have enough money to buy a car from a dealership, they can buy it, and then - who carse - al other people have to suffer because the owner didn't have the money to buy a parking space near home - be it an underground car park or anything else - so they live it where they please. And they don't have a parking space near work either. So they've bought a car, but everybody else has to suffer."

He's right about many things, but you can't deny the authorities any kind of responsibility. They do need to address the situation. Building more car parks is one thing, convincing people actually to use them is another since, all of a sudden, they would have to pay for this privilege. "I don't want to dump my personal problem on somebody else," he says, but others clearly have no problem doing just that.

And it's not the first bit of common sense Islam tries to talk into the mind of this woman: "If I'm going somewhere where I know I won't be able to park, I take the subway or a taxi," he says, accompanied by a shrug meaning "you see? It's as simple as that." That's because he doesn't consider the first, and sometimes even second lane of traffic his personal parking space. At the end of the day, it's all down to education, and that's exactly what these guys are trying to do. Not everybody agrees with their methods, but it's good to know that their driving force is morally correct. 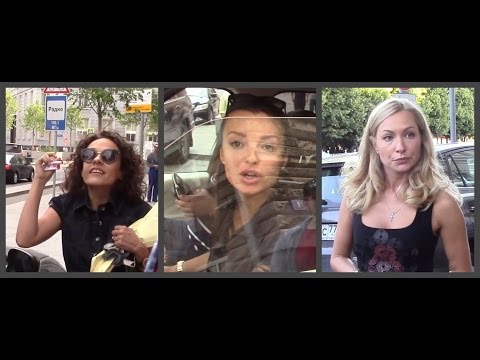