1 The Search for Sun-Loving Machines Has Begun! Try Starting With the 500 Series E-Bike

3 Simon Cowell Crashes Another e-Bike, Is Hospitalized for a Broken Arm

4 The Grow-It-Yourself Bike Helmet Grows as You Grow, Is Sustainable

President Biden Falls Off His Bicycle on Delaware Ride, Is Fine

Falling off your bike is something you expect and are prepared for if you’re a cyclist. Accidents can and do happen, and as the latest breaking story shows, they also happen to the most powerful man in the world, U.S. President Joe Biden.
6 photos

POTUS Joe Biden turns 80 in November, so his age alone makes his passion for cycling noteworthy. On a ride this weekend, it was his fall off the stationary bicycle that made headlines. Biden and Dr. Jill Biden, followed by a large team of Secret Service agents both on foot and on two-wheelers, went out for a ride in the state park near their home in Rehoboth Beach, Delaware.

A crowd of press representatives and supporters gathered on the way and, as you can see in the videos below, the President broke free from the convoy to do a little crowd-surfing. He approached the group at a slow speed, braked and stopped, but as he tried to dismount his Trek bike, his foot got caught in the toe guard, and he ended up toppling over like a felled tree.

Secret Service agents immediately rushed to him, keeping the crowd at bay and helping him up. Despite the seemingly hard fall and Biden’s age, he brushed the incident right off, telling his supporters that he was “fine.” He later explained that his foot got caught in the pedal, and laughed that he should just remove the toe guard like he’d been meaning to.

As the story went viral online (after all, it’s not every day you get to see a president fall off his bike, let alone the “ruler of the free world” as POTUS is often described), the White House issued a statement to set the record straight: the President is fine. “As the President said, his foot got caught on the pedal while dismounting and he is fine. No medical attention is needed. The President looks forward to spending the rest of the day with his family,” the statement reads.

The Bidens are celebrating Father’s Day this weekend, as well as their 45th wedding anniversary. A bike fall might not be the ideal way to kick off celebrations, but accidents don’t care if you’re famous or not. 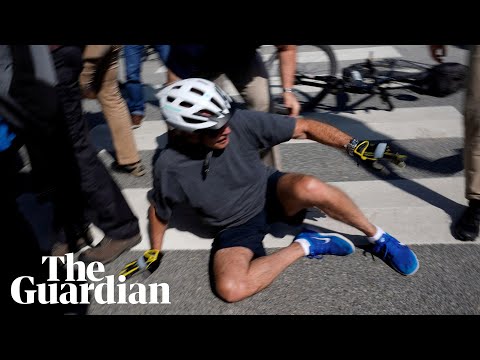 President Joe Biden fell when he tried to get off his bike at the end of a ride Saturday at Cape Henlopen State Park near his beach home in Delaware, but wasn't hurt in the tumble. https://t.co/pu2QjQH0Ll pic.twitter.com/L05WjnB8WI